Businesses Strategize to Get Work Done with Fewer Staffers

Small business owners who want or need to limit hiring have developed strategies that allow them to work more cheaply. 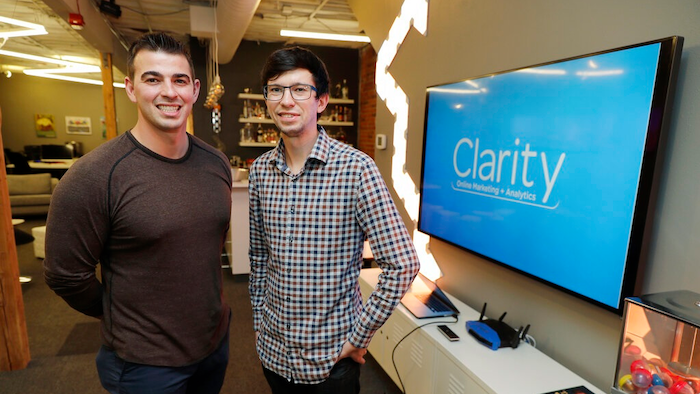 In this Tuesday, Sept. 10, 2019, photo Shane Griffiths, right, and Trenton Erker, left, co-owners of the digital marketing company Clarity Online, pose for a photo in Seattle. Griffiths and Erker use technology for tasks like billing, scheduling appointments, tracking the time they spend on clients' projects and putting together reports on visits to client websites, as well as using freelancers for other tasks as ways to save money on employment costs, and also have more flexibility when they need specific talents or expertise for a project.
AP Photo/Ted S. Warren

Williams decided years ago she didn't want a large staff that would require her to increase her caseload simply to have the money to pay her employees. She has one part-time assistant and uses software for tasks like scheduling and sharing documents with clients.

"I never want to have a practice where people feel like their lawyer is being spread too thin," says Williams, who is based in Charleston, South Carolina.

Small business owners who want or need to limit hiring have developed strategies that allow them to work more cheaply. Many have embraced software and apps that do administrative tasks, make manufacturing more efficient or provide quick customer service. Many owners use freelancers or independent contractors rather than employees; companies save money on employment costs, and also have more flexibility when they need specific talents or expertise for a project.

These trends have contributed to the often erratic pace of small business hiring since the Great Recession. Last week, payroll company ADP said its small business customers created 66,000 jobs in August. That was after adding just 1,000 in July and cutting 11,000 in June and 34,000 in May.

Williams uses technology to keep her overhead down, but her practice management software also makes communication with clients easier; it sends messages, shares documents and has a calendar that lets clients, witnesses and other attorneys know about court dates, meetings and other events.

Taking on more clients to pay for more staffers would detract from Williams' ability to give each case the attention it needs.

"Clients are facing difficult, possibly life-altering scenarios with their case outcomes," she says. "Quality is far more important than quantity when the stakes are this high."

Expect small businesses to keep automating. A report from the Brookings Institution released in January said that approximately 36 million people, or a quarter of the current U.S. workforce, could see the majority of their work done by machines that use current technology.

The savings at any company depends on how much it pays staffers. Office workers, for example, earned a median salary of $32,730 last year, according to the Labor Department. Add in expenses including benefits, payroll taxes and state-mandated costs like workers compensation insurance, and it's a considerable expense for a small business.

Money and efficiency aren't the only factors when owners rely on technology rather than humans. Not all business owners have the time or inclination to be managers. Moreover, some find that with a larger staff they have less flexibility when it comes to saying yes or no to new business; they must bring in revenue so they can pay employees.

At some companies, the transition has occurred as technology has changed how society works. Tom Nardone's company used to have two or three customer service people to answer the phones, take orders and field questions. But most customers now prefer to buy online and use email for questions and requests. Nardone, president of BulletSafe Bulletproof Vests, needs just one customer service staffer, and because technology has freed up his time, he can focus more on prospecting for new business.

"We do more trade shows. We went from six a year to now 13 or 14 a year," says Nardone, whose company is based in Troy, Michigan. "I spend more time just talking to people."

Relying more on freelancers rather than full or part-time employees is a trend that began during the recession. It has continued partly for financial reasons, but also because owners don't want to risk having to lay off staffers if the economy weakens, which it has been showing signs of doing in recent months.

"We are careful not to hire as a knee jerk reaction to spikes in business," says Matt Secrist, co-owner of BKA Content, a company that relies almost entirely on freelancers to create written material for websites.

BKA Content, based in Ogden, Utah, adjusts its use of freelancers depending on its work flow.

"We may only need additional help for a few months at a time, which doesn't always necessitate a new hire," Secrist says.

There are also practical reasons for using freelancers — the work some companies need is so varied that it's impossible to find a full-time staffer who can do everything.

"If we wanted to hire a full-time position, we'd struggle to find someone that can wear multiple hats," says Shane Griffiths, co-owner of Clarity Online, a Seattle-based digital marketing company. Griffiths and his business partner, Trenton Erker, juggle tasks including web design, graphic design, social media, data analysis, copywriting and account managing, but know they can't expect anyone else to have that kind of versatility.

Griffiths and Erker use technology for tasks like billing, scheduling appointments, tracking the time they spend on clients' projects and putting together reports on visits to client websites.

At some companies, using technology or relying on freelancers allows owners to actually spend a little more, paying employees a higher wage or salary. At Chill-N Nitrogen Ice Cream, a chain of eight stores in South Florida, new technology helps employees produce and sell 120 cups of ice cream an hour, compared to 60 to 70 before the company upgraded its equipment. That allows the company to have one less staffer at each store.

"We can pay the people in the stores more because we don't need as many," co-owner Daniel Golik says.