Puerto Rico has not paid crews as part of a contract that led to accusations of overcharging and incompetence. 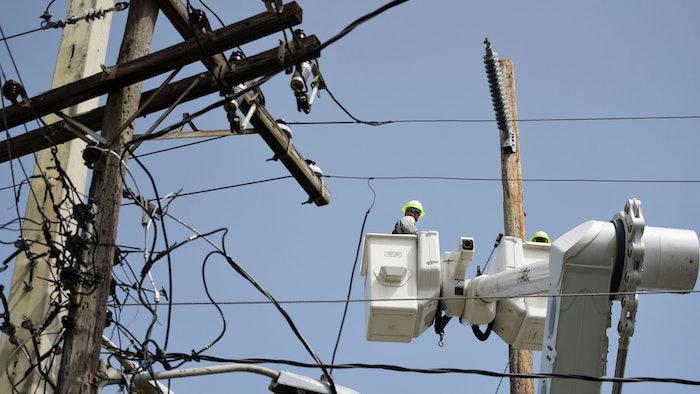 SAN JUAN, Puerto Rico (AP) — Whitefish Energy Holdings said late Monday that it was halting work to help restore power in Puerto Rico because the U.S. territory's government has not paid crews as part of a contract that led to accusations of overcharging and incompetence and contributed to the resignation of the power company director.

The Montana-based company said in a statement that invoices for work done in October are outstanding and that it can no longer keep working. The Associated Press obtained a letter dated Nov. 19 and signed by Whitefish CEO Andy Techmanski saying that Puerto Rico's government owes Whitefish more than $83 million and that the company would suspend work on Monday if it wasn't paid.

Whitefish said in the letter that the lack of payments is a breach of the $300 million contract that the administration of Gov. Ricardo Rossello cancelled last month. Even though the contract had been cancelled, both sides agreed Whitefish would complete its current projects and remain in Puerto Rico until Nov. 30.

"There is no basis for PREPA to withhold payments from Whitefish Energy," the letter said, referring to the Puerto Rico Electric Power Authority. "We have met the terms of the contract — including completing difficult work on time and under challenging conditions."

The company said Techmanski was not immediately available for comment.

Whitefish also said Monday that Florida-based utility companies working in Puerto Rico were pulling out ahead of time.

"While we cannot speak for these utilities, we have been assured by their representatives that this is about their go-forward concerns once Whitefish Energy completes its work with PREPA and the ability of PREPA or any successor organizations to provide their crews with the necessary resources and management," Whitefish said.

The company said it would resume work if it obtained the payments owed.

Meanwhile, Puerto Rico's government said in a statement late Monday that Whitefish is alleging nonpayment and that the power utility is reviewing and auditing Whitefish invoices. It also said the Electric Power Authority was forced to stop pending payments "until the situation with the Whitefish subcontractor is clarified."

Puerto Rico power company spokesman Carlos Monroig told the AP that both sides are in talks to reach an agreement to satisfy everyone involved.

The dispute comes just days after the resignation of Ricardo Ramos, the power company director who signed the Whitefish contract, which is undergoing a local and federal audit. Documents released by the U.S. House Natural Resources Committee ahead of a recent hearing show the electric utility ignored advice from its own lawyers before signing the contract with Whitefish, which is based in Interior Secretary Ryan Zinke's hometown and had just two employees when Hurricane Maria hit.

Many people in Puerto Rico remain without power two months after the Category 4 storm devastated the island, killing at least 55 people and causing damage estimated at up to $95 billion.

More than 20 of Puerto Rico's 78 municipalities remain in the dark, and overall power generation stands below 50 percent. Major blackouts also have hit the capital of San Juan and surrounding areas in recent weeks, for reasons ranging from overgrown vegetation to fuel not being supplied in time because of logistical limitations.

The hurricane hit as Puerto Rico entered its 11th year in recession and struggles to restructure a portion of its $73 billion public debt load. The power company holds about $9 billion of that debt.