The meal-kit seller says it's having unexpected delays at a new plant. 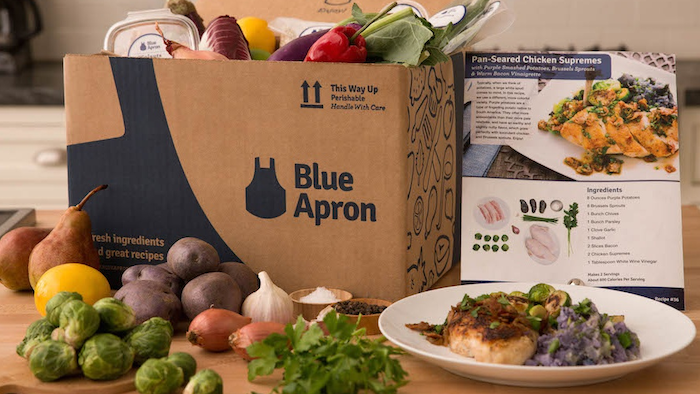 Blue Apron posted strong revenue growth in its second quarter, but the meal-kit seller says it's having unexpected delays at a new plant and it gave a weak revenue forecast for the second half of the year.

Shares of Blue Apron, which was providing its first earnings report since becoming a public company, tumbled more than 17 percent to $5.15 in afternoon trading on Thursday. That's nearly half its initial public offering price of $10.

The company had said last week that it was closing its facility in Jersey City, New Jersey, and about 470 workers might lose their jobs if they didn't transfer to a new plant in Linden, New Jersey. Chief Financial Officer Brad Dickerson said Thursday there have been "unexpected complexities and costs" at the Linden plant in the past month as Blue Apron transfers products there.

The company foresees revenue for the second half of the year in a range of $380 million to $400 million, Dickerson said. Analysts polled by FactSet had expected revenue of about $525.1 million, when combining their estimates for the third and fourth quarters.

Total revenue for the period ended June 30 rose to $238.1 million from $201.9 million. That's better than the $235.8 million that analysts surveyed by FactSet predicted.

But Blue Apron has many rivals, including HelloFresh and Plated, and there are concerns that competition to deliver groceries to people's doorsteps will only heat up after e-commerce giant Amazon.com Inc. announced plans to buy organic grocer Whole Foods. In some cities, Amazon already sells meal kits with recipes created by home goods mogul Martha Stewart.

The company, which was founded five years ago, has yet to make a profit. It reported a loss of $55 million last year, but its sales have soared. Blue Apron posted revenue of $795.4 million for 2016, more than double its level the year before.

Last month Blue Apron said that one of its co-founders, Matthew Wadiak was stepping down from his role as chief operating officer and would become a senior adviser to the company.