Multibillion-Dollar Contract for Lab Up for Bid

The lab created the atomic bomb, but has a troubled safety record. 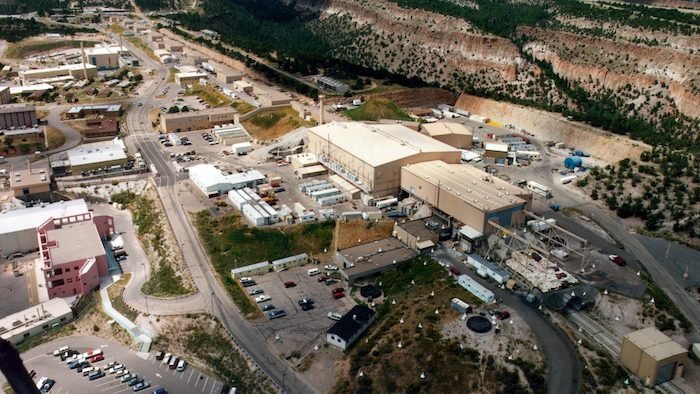 This undated aerial view shows the Los Alamos National laboratory in Los Alamos, N.M. The competition for a multibillion-dollar contract to manage the troubled Los Alamos National Laboratory is beginning after a week in which the northern New Mexico facility was hit with criticism for its record of safety lapses.
The Albuquerque Journal via AP, File

ALBUQUERQUE, N.M. (AP) — The competition for a multibillion-dollar contract to manage the U.S. laboratory that created the atomic bomb is beginning as criticism intensifies over the troubled safety record of Los Alamos National Laboratory.

The National Nuclear Security Administration on Tuesday posted online its intent to conduct a competition for the management and operation contract.

The agency said the process will provide the best opportunity to improve the terms and conditions of the lucrative contract to provide performance incentives at the northern New Mexico nuclear weapons research center.

Lab Director Charlie McMillan told employees in an internal memo that the work done at Los Alamos will transcend the contract changeover.

"We must continue to execute our national security mission safely and securely while the NNSA works to complete their process," he wrote.

It was first announced in late 2015 that the current manager, Los Alamos National Security LLC, would be losing its $2.2 billion contract since it failed to earn high enough performance reviews.

Now, criticism of the lab's safety record has intensified as it prepares to resume production of plutonium pits for the nation's nuclear weapons cache.

Los Alamos officials have said the plutonium facility is operating safely and that improvements have been made in recent years. But watchdog groups and others have questioned whether the lab can take on manufacturing of the plutonium cores given its history of management and oversight issues along with more recent safety concerns.

Greg Mello with the Los Alamos Study Group said the present contract model separates authority from responsibility. He suggested the federal government have more of a role in operating the lab with the help of one or more private contractors.

"Accidents and shutdowns will be inevitable until NNSA can start exerting sufficient authority, including and especially budget authority, at LANL," Mello said.

On Friday, federal officials announced an investigation into the lab's improper shipment of nuclear material to other federal facilities around the country via a commercial cargo plane.

That followed other reports about the mishandling of plutonium and radioactive waste at Los Alamos, home to some of the nation's top nuclear scientists and other researchers.

A series published by the Center for Public Integrity cites numerous internal reports and other documents outlining federal regulators' concerns about safety lapses at the lab over the years, including a plutonium spill last summer and workers handling plutonium rods in a way that could have been disastrous.

The center this week also detailed workplace hazards at Los Alamos, Sandia National Laboratories and other labs that make up the U.S. nuclear complex, suggesting that lax oversight along with light penalties have contributed to a weak safety culture at the labs.

Federal records obtained by the center show numerous instances in which the contractors committed new safety infractions, even after being hit with financial penalties for malfeasance. Experts say the situation suggests the contractors are building the fines and penalties into their economic models.

Los Alamos also has struggled to rebuild its reputation following a 2014 chemical reaction that stemmed from inappropriately packaging a barrel of radioactive waste. That caused a radiation leak at the government's only underground nuclear waste repository that led to costly recovery work and a backlog in the nation's multibillion-dollar program for cleaning up waste from decades of research and bomb-making.

There have also been reports that Los Alamos failed more than once in recent months to accurately document and label hazardous liquid that was shipped to a disposal facility in Colorado.

"The actions we take each and every day on the job can have a profound impact on the laboratory's reputation and its future," Nerzig said. "As (McMillan) has often said, the laboratory has a vibrant future, but this future depends on the staff's commitment to executing our national security mission safely and securely every day."

The NNSA plans to release more details about the request for management proposals in the coming weeks. Spokesman Greg Wolf said the agency wanted to start the process now to ensure a "full and open competition" as well as a smooth transition before the current contract expires in September 2018.