An independent monitor tasked with overseeing Volkswagen said he and the automaker would "work toward the common goal of making this company better." 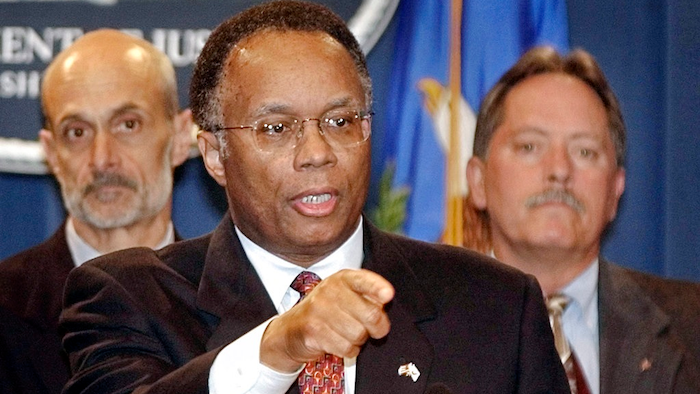 In this Oct. 17, 2002 file photo Deputy Attorney General Larry Thompson, center, talks with reporters in Washington, United States. At left, Michael Chertoff, then head of the Justice Department's Criminal Division, and FBI Deputy Director Bruce Gebhardt, right, listen. Thompson the independent monitor overseeing Volkswagen's efforts to prevent a repeat of its emissions scandal says he has a "broad mandate" to review the company's practices and that his initial impression is that VW is making a serious effort to reform.
AP Photo/Toyokazu Kosugi, File

WOLFSBURG, Germany (AP) — The independent monitor overseeing Volkswagen's efforts to prevent a repeat of its diesel emissions scandal said Tuesday that his "initial impression" is that the company is making a serious effort to change its ways.

Former U.S. deputy attorney general Larry Thompson must certify the policies and practices Volkswagen is putting in place to ensure compliance with anti-fraud and environmental laws. The appointment of an independent monitor was a condition of Volkswagen's guilty plea to U.S. criminal charges.

The former PepsiCo general counsel says that his "initial impression is that the company is taking this very seriously and is not waiting for the monitor" to make proposals.

Thompson served as U.S. attorney for the northern district of Georgia in 1982-86. As deputy attorney general, he headed the Department of Justice's National Security Coordination Council and a government-wide corporate fraud task force. He was one of three monitor candidates proposed by Volkswagen; the Justice Department made the final decision on his appointment.

Volkswagen has agreed to pay up to $25 billion to settle civil and criminal cases in the U.S. related to its emissions scandal, in which it equipped cars with software to cheat on diesel emission tests. Seven former Volkswagen employees were criminally charged, one of whom has pleaded guilty. At the time the company's agreement to plead guilty was announced in January, U.S. prosecutors did not exclude charging more people. Volkswagen also faces criminal investigations and investor lawsuits in Germany.

Thompson, 72, said he and his staff of about 22 will be reviewing documents, interviewing employees, and making recommendations in what he said would be "a dialogue" with the company. He said the team would work out of offices at Volkswagen's headquarters in Wolfsburg, Germany, in Herndon, Virginia, where Volkswagen has its U.S. corporate offices, and likely at the Ingolstadt, Germany, headquarters of Volkswagen's Audi division.

Thompson said he and his staff would speak to people who have left the company since the scandal broke in September, 2015 but declined to say whether that would include former CEO Martin Winterkorn, who resigned days after the U.S. Environmental Protection Agency announced its notice of violation.

Winterkorn has testified in the German parliament that he did not know about the software cheating until shortly before the scandal became public.

Thompson said he and Volkswagen would "work toward the common goal of making this company better."

His mandate during his three-year term is to review the company's attempts to change its procedures and culture, including by empowering employees to speak up. "I will have complete access to the company's information" during that process, he said. At the end, he will report on whether the company has implemented effective safeguards.

His review, he said, looks to the company's future conduct and does not aim primarily at uncovering past wrongdoing since the company has admitted it is at fault. But assessing what happened "will be part of our report, why it happened and what is being done to make sure it doesn't happen again."

He noted that Volkswagen was "not only a large company, it's a complex company" with an array of brands and more than 600,000 employees working in over 100 countries. "It's a big task to get my arms around all of this," he told journalists in Volkswagen's high-rise offices overlooking the Wolfsburg factory.

"We have a long road to go... I think the company wants to get this behind it."