The most dangerous radioactive waste at Hanford is 56 million gallons stored in 177 underground tanks, some of which have leaked. 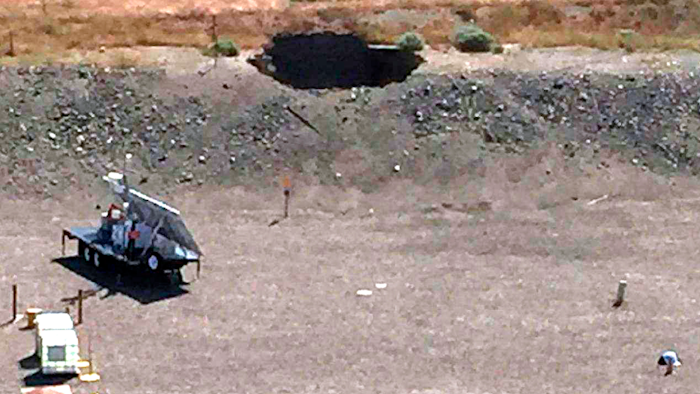 This image provided by the U.S. Department of Energy shows a 20-foot by 20-foot hole in the roof of a storage tunnel at the Hanford Nuclear Reservation near Richland, Wash., Tuesday, May 9, 2017. An emergency was declared Tuesday after the partial collapse of the tunnel that contains rail cars full of radioactive waste.
U.S. Department of Energy via AP

The tunnel that contained highly radioactive wastes left over from production of plutonium for nuclear weapons partially collapsed on May 9, prompting evacuation of nearby workers.

The hole left by the partial collapse was filled with more than 50 truckloads of soil the next day.

The Energy Department has said no workers were injured and no airborne radiation escaped into the environment as a result of the incident. The agency said the cover will provide additional protection while work continues to find a permanent fix.

Crews from contractor CH2M HILL Plateau Remediation Company placed the cover over the tunnel and secured it on the sides with heavy concrete blocks. Over the next few days, crews will string cables across the cover.

"Since this event began, our focus has been on protecting our workers, the public, and the environment," said Doug Shoop, manager of the Department of Energy's Richland, Washington, office, where Hanford is located.

The heavy plastic cover has a high density polyethylene woven core and is resistant to puncture, abrasion, chemicals, ultraviolet rays and oxidation, the agency said. At approximately 40,000 square feet (3,716 square meters), the cover will also limit water intrusion on the tunnel.

The 360-foot long (110-meter) rail tunnel was built in 1956 from timber, concrete and steel. Radioactive waste was stored inside and the entrance was sealed in 1965.

The waste came from a nearby factory where plutonium was extracted from 1956 to 1988 from spent nuclear fuel rods as part of the process to make nuclear weapons.

The tunnel contains about 780 cubic yards (596 cubic meters) of waste — a mixture of radioactive and chemical waste and irradiated equipment, including eight contaminated rail cars used to haul the fuel rods.

The incident occurred at the smaller of two tunnels located near the closed Plutonium Uranium Extraction Plant. The larger one was built in 1964 and contains 28 railroad cars filled with radioactive waste.

The Energy Department was warned in a 2015 report it commissioned that both tunnels were vulnerable to a collapse from an earthquake or deterioration of tunnel building materials caused by intense radiation.

Hanford, created during the World War II Manhattan Project to build an atomic bomb, stopped making plutonium in the 1980s. The 500-square mile (1,300-square kilometer) site now is engaged in cleaning up the radioactive waste.

The tunnel collapse reinforced longstanding criticism that toxic remnants at Hanford are being stored in haphazard and unsafe conditions, and time is running out to deal with the problem.

The cleanup of all Hanford's waste is expected to last until 2060 and cost an additional $100 billion over the $19 billion already spent.

The most dangerous waste at Hanford is 56 million gallons (212 million liters) stored in 177 underground tanks, some of which have leaked. Plans to embed the toxic stew in glass logs for burial have floundered. Construction of a $17 billion glassification factory has been delayed because of design and safety issues.

Nuke Docs Won't Be Made Public