Engineers will begin transitioning from the emergency response to planning a permanent fix. 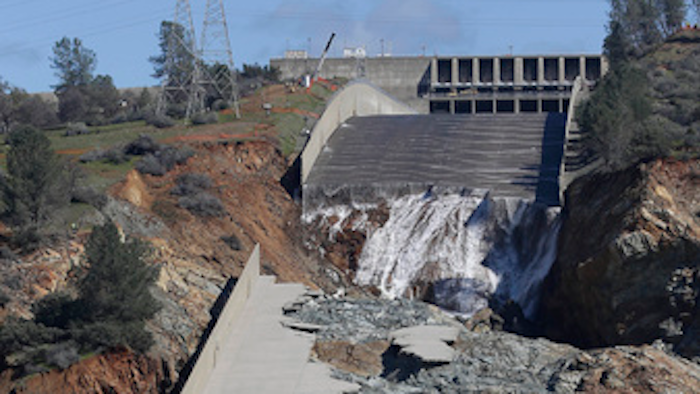 SACRAMENTO, Calif. (AP) — Crews began restarting a power plant Friday at the base of Oroville Dam, allowing them to release water from the Northern California lake without having to send it over a badly damaged spillway, officials said.

The move is a major milestone in the race to protect Oroville and downstream communities from the threat of flooding, said Bill Croyle, acting director of the California Department of Water Resources. Weekend rain is expected to raise the water level about five feet, but it will still be nearly 50 feet below capacity, he said.

Several days of dry weather allowed construction crews to remove part of a massive debris pile that trapped water at the base of the dam, threatening to flood the Hyatt Power Plant. Waters levels dropped about 30 feet from their peak Friday, far enough below the power plant's intake for electricians to reconnect the plant to the grid.

One of six turbines was restarted, allowing dam managers to release 1,700 cubic feet per second through the power plant. About 14,000 cubic feet of water can be released through the power plant each second once five turbines are going — the sixth is undergoing more intensive repairs out of state — allowing officials to release much of the water flowing into the lake and prevent it from rising substantially.

"This is a pivot point in how we are managing the inflows to the river," Croyle said.

Even with the power plant operating, Croyle said he may still have to use the damaged spillway if heavy storms or spring snowmelt raise the lake level too high. He said crews will spray a substance on the hillside to limit further erosion if the spillway is used.

As the spillway is reinforced and the situation gets less dire, engineers will begin transitioning from the emergency response to planning a permanent fix, Croyle said. It will likely take several weeks for officials to develop options for a long-term solution, which may include a temporary fix for next winter.

The problems at Lake Oroville began early last month when officials discovered a massive crater in the main concrete spillway used to release water during wet winter months. Water releases were curtailed so experts could investigate, followed by stronger-than-expected storm that filled the lake to capacity and sent water overflowing onto a hillside for the first time in the dam's five-decade history.

Nearly 200,000 people were ordered to evacuate from parts of three counties when experts discovered severe erosion and feared it could cause the collapse of a concrete weir holding water in the lake. Crews opened the floodgates to more rapidly drain the lake, sending 100,000 cubic feet of water — enough to fill any Olympic swimming pool — each second down the damaged spillway.

Butte County Sheriff Kory Honea said Friday that he expects to release detailed evacuation plans next week that will show which homes are at risk in the event of a future failure at the dam, limiting the mass chaos that ensued when people rushed to higher ground when the blanket evacuation order was given.

An estimated 1.7 million cubic yards of rock, sediment and other debris washed down the hillside and collected at the base. Construction crews worked around the clock this week to haul debris to five nearby locations and clear a path for pooled water to drain. By Friday morning, about 10 percent of the debris had been cleared.