Samsung said it had confirmed 35 instances of Note 7s catching fire or exploding. 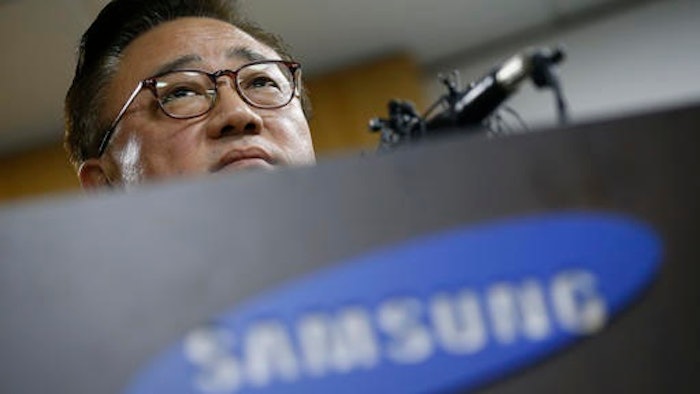 Koh Dong-jin, president of Samsung Electronics' mobile business, speaks at a news conference in Seoul, South Korea, Friday, Sept. 2, 2016. Samsung suspended sales of its Galaxy Note 7 smartphone on Friday, just two weeks after the flagship phone's launch, after finding batteries of some of the gadgets exploded while they were charging. Koh said customers who already bought Note 7s will be able to swap them for new smartphones, regardless of when they purchased them.
Kim Hong-Ji/Pool Photo via AP

SEOUL, South Korea (AP) — Samsung Electronics recalled all of its Galaxy Note 7 smartphones on Friday after finding batteries of some of the flagship gadgets exploded or caught fire.

Samsung's Note 7s are being pulled from shelves in 10 countries, including South Korea and the United States, just two weeks after the product's launch. Customers who already bought Note 7s will be able to swap them for new smartphones in about two weeks, said Koh Dong-jin, president of Samsung's mobile business.

He apologized for causing inconvenience and concern to customers.

The recall, the first for the new smartphone, comes at a crucial moment in Samsung's mobile business. Apple is scheduled to announce its new iPhone next week and Samsung's mobile division was counting on momentum from the Note 7's strong reviews and higher-than-expected demand.

Samsung said it had confirmed 35 instances of Note 7s catching fire or exploding. There have been no reports of injuries related to the problem.

The company said it has not found a way to tell exactly which phones may endanger users out of the 2.5 million Note 7s already sold globally. It estimated that about 24 out of 1 million units may have a faulty battery.

After complaints surfaced online, Samsung found that a battery cell made by one of its two battery suppliers caused the phone to catch fire. Koh refused to name the supplier.

"There was a tiny problem in the manufacturing process, so it was very difficult to figure out," Koh told reporters at a news conference. "It will cost us so much it makes my heart ache. Nevertheless, the reason we made this decision is because what is most important is customer safety."

Customers' reports of scorched phones prompted Samsung to conduct extra quality controlling tests and delay shipments of the Note 7s this week before the recall.

South Korean high school teacher Park Soo-Jung said she had rushed to buy the new phone, pre-ordering and then activating it on Aug. 19, its official launch date.

The 34-year-old living in the port city of Busan said that she was bruised when she rushed out of bed after her phone burst into flames, filling her bedroom with smoke stinking of chemicals.

She's having second thoughts about buying another newly released device, especially after losing all her personal data stored in the destroyed Note 7, she said.

"If the exploded phone had burned near my head, I would not have been able to write this post," she said in a popular online forum Thursday, where she shared a photo of the scorched Note 7 and described dousing the flames.

China is not affected by the sales suspension. The company said it used a battery made by another supplier for the Note 7s sold in China.