Supersized alcopops — such as Four Loko — are sugar-sweetened beverages with as much as 14 percent alcohol-by-volume (abv) or 5.5 standard alcoholic drinks in one 23.5 oz. can. The studies looked at consumption in three states and found that most college students who drank Four Loko first did so when they were under the legal drinking age, many experienced dangerous effects such as blacking out or vomiting while consuming it, and most grossly underestimated its alcohol content despite bearing new mandated labels.

One of the studies, published Oct. 8 in the American Journal of Drug and Alcohol Abuse, surveyed young college students in three states to assess how accurately they could estimate the alcohol content in Four Loko, the most commonly consumed supersized alcopop among underage drinkers. Using survey data collected in college classrooms by Rossheim and colleagues, the study found that even when cans included the Federal Trade Commission's newly-mandated label, the majority of young adults (57 percent) underestimated Four Loko's alcohol content by one or more drinks. Students were more successful at estimating the alcohol content of Four Loko's 8 percent alcohol version (sold in Montana) than its higher alcohol concentrations (sold in Virginia and Florida). More than 60 percent of Florida students and more than 70 percent of Virginia students underestimated Four Loko's alcohol content by one or more standard drinks, compared to 45 percent of Montana students. Nearly one-third (31 percent) of participants in Florida and nearly one-half (49 percent) of participants in Virginia underestimated the alcohol content of Four Loko by two or more standard drinks, compared to only 4 percent in Montana.

"Even with the FTC-mandated labels, college students are drastically underestimating the amount of alcohol in a single can. In states that sell 12 percent abv Four Loko, 65 percent of students underestimated it alcohol content by at least one drink and 38 percent underestimates by two or more drinks," explains Rossheim. "This underestimation is dangerous and could lead to overconsumption, blacking out, and decisions to drive after drinking, among other risky behaviors."

A companion study, published in August in the same journal, assessed first time consumption of Four Loko among college students. Drawing on the experiences of 336 underage college students at universities in Virginia, Florida, and Montana, the study found that nearly all respondents who had consumed Four Loko first did so while underage (93 percent).

The study also asked about consequences from drinking Four Loko. Students in Virginia and Florida, where Four Loko's alcohol by volume ranges from 12 to 14 percent, were twice as likely to black out and vomit their first time drinking it as students in Montana, where only the 8% version is available. More than half (57 percent) of students consumed at least one can their first time, and 10 percent drank two or more cans. Of underage drinkers who finished at least one can, 36 percent blacked out and 21 percent vomited. Drinkers who were male, paid for the drink, or tried it at a younger age were far more likely to drink at least one entire can.

"These studies suggest that the weaker version of Four Loko available in Montana gives students a better shot at accurately estimating its alcohol content and avoiding blacking out or vomiting on first use," explains Rossheim. "Limiting the alcohol content of these beverages could help reduce the harmful effects they have on young people."

Following the death of a 14-year old girl who had consumed supersized alcopops, Canada reclassified the beverages last May and restricted the alcohol content in each container to 1.5 standard alcoholic drinks. In 2015, 17 U.S. State Attorneys General wrote to the manufacturer of Four Loko requesting that they reduce the abv of their product from 12 percent to the industry standard of 8 percent. Beyond ignoring this request, the manufacturers have since released several new flavors with even greater alcohol content, 14 percent abv.

"These products now deliver almost a six-pack of beer's worth of alcohol in a single serving can," said Rossheim. "In the absence of voluntary action, it is urgently important that legal or regulatory actions are taken to reduce the abv of supersized alcopops, to mitigate the risks they pose to young people." 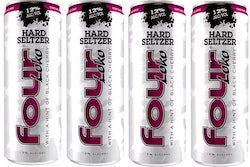