A fight is on, pitting a growing number of vegetarians and vegans against meat-eaters in a country known for its abundant beef and sacred "asado" barbecues. 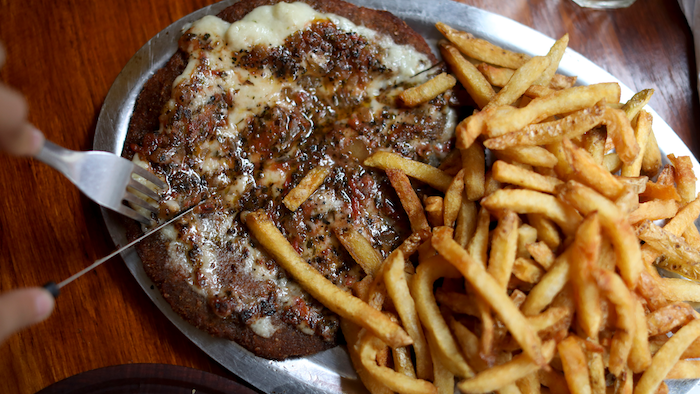 A dish at "La Reverde" vegan restaurant in Buenos Aires, Argentina. A steak made with wheat gluten and ingredients including beet puree and spices help create a similar tone to beef.
AP Photo/Natacha Pisarenko

BUENOS AIRES, Argentina (AP) — A fight is on over the Argentine identity, pitting a growing number of vegetarians and vegans against meat-eaters in a country known for its abundant beef, gaucho cowboys and sacred "asado" barbecues.

The weekend "asados" bring together families and friends and are a source of national pride in this South American country, which traditionally battles neighboring Uruguay for world leader in per-capita beef consumption. But this carnivorousness is being threatened by rising support for vegetarianism and veganism among Argentines, particularly the young and millennials, and growing militancy by activists.

A recent private online questionnaire found that six of every 10 Argentines are disposed to stop eating beef, a figure that alarmed ranchers who are already struggling through an economic crisis. The cultural divide came to a head several weeks ago when anti-animal cruelty activists interrupted an exhibition of the Buenos Aires Rural Society and were met by ranchers, some dressed in traditional gaucho outfits, who charged at them on horses with whips.

The younger generations "have grown up amid the debate over abortion in Congress; inclusion, gender equality ... These collective questions have started to gain weight in decisions about the purchase of foods," said Adrián Bifaretti, head of marketing at the Institute for the Promotion of Beef and author of the online survey and focus group that found a widespread readiness to give up beef. Bifaretti said the findings are based on doing a survey of 1,100 people every two months in a poll with a margin of error of three percentage points.

A July report by Argentina's Chamber of Commerce for Beef and its Derivatives said Argentines are consuming on average 50 kilograms (110 pounds) of beef a year, what it called the lowest level in the history of this country, where cattle brought by the Spanish centuries ago thrived on vast prairies knows as pampas.

"This concern about cruelty and the slaughter is here and is going to be felt," Bifaretti said, adding that trends seen in other parts of the world are arriving in Argentina. "It is starting to be a challenge."

Much of the anti-beef activism comes from vegans.

Lying on the grass, Melisa Lobo stroked the snout of Apollo, a weeks-old black calf about the size of a Labrador dog. Nearby, goats, sheep, chickens and ducks roamed and socialized at "Wild Sanctuary," on nearly five acres of land an hour from Buenos Aires. "In the sanctuary, animals live out their entire lives," said Lobo, a 28-year-old vegan, who calls each of the 300 animals in the sanctuary by name, except for the chickens "because they are all very similar."

While a plump sheep named Bruno suspiciously approached the visitors interviewing Lobo, a goat tried to get the attention of the humans by displaying its horns.

"A person who is in contact with a dog or a cat knows that the animal feels, knows that they like to be pampered, knows when they are hungry, thirsty, cold or what hurts when they get hurt," Lobo said. "But people not so close to them don't know or don't want to know that they are sentient beings."

Veganism, a current that emerged in London during World War II, is based on a diet free of animal products, unlike vegetarians who accept the intake of milk or eggs. Vegans also reject all forms of animal exploitation, whether as labor, or for clothing, cosmetics, transportation, sports or scientific experimentation. "You receive meat on your plate and you don't think about how it got there," Lobo said. "I always liked my meat rare and I never imagined that the blood was fluid from the animal's muscle."

There is no official figure in Argentina, but Bifaretti's institute estimates vegans and vegetarians represent seven to eight percent of the population.

When it is not yet dawn in Buenos Aires's Mataderos neighborhood, the white uniforms of workers in the refrigerated meat lockers are already stained red from the beef arriving from the nearby slaughterhouses. The district supplies much of the meat for the traditional "asados" that are consumed in restaurants and homes in Argentina's capital.

"Thank God, in Argentina and in these neighborhoods people still eat the asado on weekends but in the future it could get a bit complicated," said Diego Salvo, who runs The Best Butcher Shop, acknowledging the new trends against meat. Beef is so deeply ingrained in Argentina's culture that vegan chefs need great ingenuity to adapt typical dishes to their menus.

At La Reverde, the first vegan grill in Buenos Aires,, the house specialty resembles the country's "bife de chorizo," a popular cut of boneless beef cooked on a grill. But it is really a "seitan steak," that is made from wheat gluten and ingredients including beet puree and spices that help create a similar tone to beef.

"I don't love eating animals," said Melissa Aruj, a 25-year-old after she finished a seitan cut accompanied by fries. "Without a doubt, I estimate that in 10 to 15 years a large part (of the population) will be vegetarian."

"I don't know if they will be vegan," she added. The change will be "little by little." To some activists, just eating vegan is not enough. They have stepped up their actions into militancy. A group of young people from the animal liberation group Voicot gathered on a recent Saturday to protest at the entrance to a slaughterhouse in Buenos Aires.

"It makes me very sad. Words are not enough for me to apologize to the animals because they have miserable lives. They are born with a date to die," said one protester, Jazmín Romero, tears in her eyes. She wore a black shirt proclaiming: "We are the species threatening to destroy everything."

On the other side of the divide, many Argentines see eating beef as part of their history and culture. "We aren't talking about killing the animal for sport. The animal is being transformed into food," said Bifaretti. "It has been like this throughout the history of humanity."