They're infecting at levels as high as 20 percent of Chinook from fish farms. 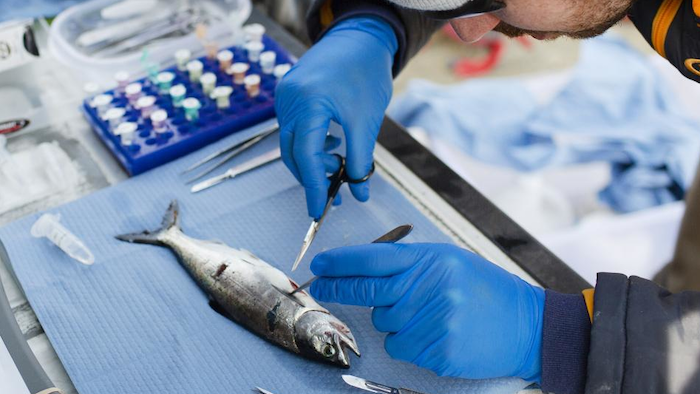 Three new viruses--including one from a group of viruses never before shown to infect fish--have been discovered in endangered Chinook and sockeye salmon populations. While the impact of the viruses on salmon health isn't yet known, all three are related to viruses that cause serious disease in other species.

"We were surprised to find viruses which had never before been shown to infect fish," said Gideon Mordecai, researcher at UBC's department of earth, ocean and atmospheric sciences. "Although there's no risk to humans, one of the viruses is evolutionarily related to respiratory coronaviruses, and is localized to the gills. That suggests it has a similar infection strategy to its distant relatives that infect mammals."

UBC and Fisheries and Oceans Canada researchers used DNA sequencing followed by tests specific to each virus to screen more than 6,000 salmon from along the B.C. coast, including wild, hatchery and aquaculture fish. "We found the new viruses widely distributed in dead and dying farmed salmon and in wild salmon," said UBC virologist Curtis Suttle. "It emphasizes the potential role that viral disease may play in the population dynamics of wild fish stocks, and the threat that these viruses may pose to aquaculture."

"It's essential that we determine whether these viruses are important factors in the decline of Chinook and sockeye salmon stocks," said Suttle. "The research highlights the need for robust surveillance to improve our understanding of how viruses might impact the health of wild Pacific salmon populations."

Over the past 30 years, steady declines in Chinook and sockeye salmon populations have been of great concern to Indigenous peoples, commercial and recreational fishers, and the general public. While much of the focus has been on the impact of piscine orthoreovirus (PRV), the new findings highlight how little is known about other viruses endemic to salmon populations.

"Being able to screen so many fish for these viruses was an exciting breakthrough, and meant we were able to identify hotspots of infection," adds Mordecai. "One of the viruses was relatively common in juvenile migratory salmon as they enter the ocean--a period thought to be critical to their survival into adulthood."