A holdup on the long, usually obstacle-free journey, even of just half a day, can be fatal for the fragile critters, turning prized seafood into worthless waste. 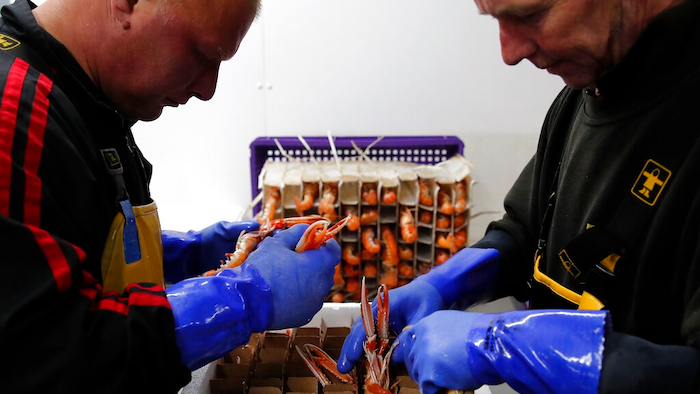 In this picture taken Tuesday, Sept 3, 2019, netted in Scottish waters, langoustines are delicately packed by hand into boxes, each upright in its own individual compartment, in Eyemouth, south coast of Edinburgh, Scotland. In their drive to uncouple Britain from the European Union, pro-Brexit campaigners have turned fishing into one of their battlegrounds. But while some seafood industry workers want out of the EU, others are alarmed at the prospect of losing frictionless access to EU consumers.
AP Photo/Francois Mori

EYEMOUTH, Scotland (AP) — Netted in Scottish waters, claws snapping and tails flapping, langoustines as pink and fat as hotdog sausages are delicately packed by hand into boxes, each upright in its own individual compartment. The care and attention testifies to their high market-value for discerning gourmets in Europe, who'll be snacking on them within hours.

While Scotland and the rest of Britain sleeps, trucks haul them southward overnight, skirting London where politicians are bitterly squabbling over the divided country's planned exit from the European Union. They then pass without impediment through the Channel Tunnel to France, and quickly onwards to fine restaurants in Paris, Monaco and elsewhere.

James Cook, who watches his workers as they prepare the shipments, has spent 40 years — "a lifetime's work," he says — building his seafood export business into a steady livelihood for 220 employees.

Europe's open, border-free single market that the British government intends to leave on Oct. 31 has allowed him to be sure that the tons of hefty lobsters and wriggling langoustines he buys from fishermen across Scotland will still be alive and ocean-fresh when delivered to European chefs. A holdup on the long, usually obstacle-free journey, even of just half a day, can be fatal for the fragile critters, turning prized seafood into worthless waste.

So Brexit , especially the scenario of Britain crashing out of the EU without a deal to keep trade as frictionless as it has been, is a prospect fraught with worry, possibly even catastrophe, for Cook. His worst case: An abrupt end to smooth market-access that could sink his export-dependent business within months.

"We may have to dismantle it next year, and I'm not overstating that fact. Everything we've built," he says. "It could take a lifetime to get this right again."

In their drive to uncouple Britain from the EU, its largest trading partner, pro-Brexit campaigners turned fishing into one of their battlegrounds. They blamed EU regulations and fishing quotas that govern the size of EU members' catches for a decades-long decline in the size of the British haul and its fishing workforce, targeting a sensitive nerve in the island nation where battered deep-fried fish accompanied by vinegar-soused chunky fries is a sacrosanct national dish.

Pro-Brexit forces promised "a sea of opportunities" that will result from Britain "taking back control" of its waters. Steaming up the Thames on a fishing trawler in 2018, pro-Brexit leader Nigel Farage dumped crates of dead fish into the river in front of Parliament to protest EU fishing policies he has decried as "madness."

Visions of richer harvests and of the once-mighty Royal Navy chasing European vessels out of now-shared waters appeal to some who work the seas from Scottish ports like Eyemouth, where old timers recall how the now largely empty harbor used to be so packed with trawlers they could walk from one side to the other without touching water.

Aboard the "Janreen," laden with crates of freshly caught langoustines, the anti-EU sentiment was clearly if also crudely expressed: A fist with the middle finger raised had been painted over an EU flag on the trawler's front bulk-head.

"They don't do anything for us. You're better off yourself, get your own waters back, do your own fishing," crewman Alan Ferguson said as he hosed down the shellfish to clean them of silt. "There's plenty of fish, just not enough quota."

Disputes over fishing rights have flared into violence at sea, and could do so again if deals aren't struck for U.K. and EU fleets after Brexit. Ferguson said he was involved in a battle in scallop-grounds off the French coast two years ago.

"We got attacked by the French for fishing in the waters. We don't attack them for fishing in our waters," he said. "They were throwing missiles and ramming boats, of course it's dangerous."

The irony was seemingly lost on Ferguson as he hazarded a guess that his langoustine catch would likely end up on plates in France and Spain. He shrugged off any likelihood of losing market-access after Brexit, saying: "That's not going to stop, is it? Why would that stop?"

But to others, promises of a Brexit bonanza smell fishy.

Craig Gillie, 26, is so pessimistic about his future catching lobsters, crabs and mackerel with his father, Andrew, from Eyemouth that he's thinking about rejoining the army.

He was stunned to discover on holiday in Spain that the small green crabs they sell for just 1 pound ($1.20) per kilo in Scotland can fetch 30 times that at Spanish market stalls.

"Garbage food in Britain is gold out there," he said. "This whole 'independence, taking back the water' is just mental-ness to be honest."

He doubts Brexiteers' claims that exporters can simply develop markets elsewhere in the world. Even if 80% of his trade wasn't with Europe, Cook suspects that airports and airfreight firms couldn't handle his 30 to 80 tons of seafood exports every week.

"You can't just disentangle that or stop it overnight, it's impossible. With the best will in the world, it would take at least a decade to try and unravel some of the trade," he says. "We can't see where the winners are with this at all."

From his warehouses in Eyemouth, where seals in the harbor have grown fat on unmarketable fish that crews toss overboard, Cook has eight to 20 trucks emblazoned "Seafood from Scotland" heading south each week to France, and onward from there.

The live cargoes can die, becoming unsaleable, if they don't reach their European destinations within 48 hours. A holdup at the Channel Tunnel, an officious French customs official, or any other post-Brexit spanner in the works could gum up his export machine that generates an annual turnover of 58 million pounds ($71 million).

An additional concern is that French fishermen could retaliate if barred from British waters, by blocking British produce at French ports.

"They can cripple the industry very, very quickly," Cook said.

To avoid any risk of trucks getting stuck, Cook intends to shut down for a few days after Britain's scheduled EU departure on Oct. 31.

He has hired extra staff to prepare paperwork he assumes might be needed — health certificates, customs forms, etc. — if the U.K. crashes out without a deal or transitional period.

In London, lawmakers fearful of the economic pain of a no-deal departure have coalesced behind legislative efforts in Parliament to rule that out as an option for Prime Minister Boris Johnson, in a showdown that could send Britain back to the polls for a new election.

While politicians have fought to a standstill, Cook has sought to prepare his company, D.R. Collin & Son Ltd., by making it leaner, selling off less-profitable parts, shedding a couple of workers, and freezing investment to build up cash reserves that could buoy the business in choppy waters.

To cushion any post-Brexit hit for fishermen who supply him, he plans to keep buying their catches but will store them in water tanks until he decides it's safe to export again.

"We can buy ourselves a few days," he said. "After that, it becomes very difficult."

But absent a divorce deal with the EU, repeatedly turned down in Parliament, he's unclear what other contingency planning he can do.

"All that we need is a decision," he said. "If it's bad, OK, it's bad, we could find a way through it. But what we can't deal with is the uncertainty."