Japan is urging South Korea to scrap a ban on seafood imports enacted after the Fukushima nuclear reactor meltdown. 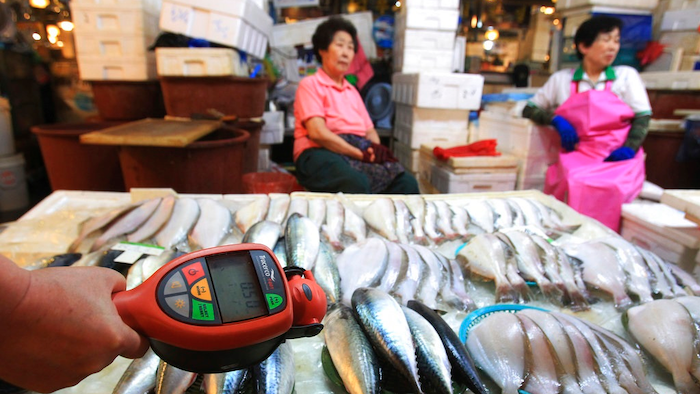 The government said in a statement that the appeal was meant to protect public health and safety. It said it will maintain its existing regulations on imports of Japanese seafood.

In 2013, South Korea banned imports of all fishery products from eight Japanese provinces near Fukushima after Tokyo Electric Power reported leaks of radiation-contaminated water. That tightened restrictions imposed after the nuclear disaster at the Fukushima Dai-Ichi nuclear power plant in March 2011. It also required inspection certificates for food products from Japan if small amounts of radioactive cesium or iodine were detected.

Japan filed a complaint against the move in 2015.

Japan's minister of Agriculture, Forestry and Fisheries, Ken Saito, said the appeal was regrettable. He urged South Korea to abide by the decision and scrap its current practices.

"Japan will respond accordingly so that our position will be accepted by the Appellate Body as well. We will also call on South Korea to sincerely and promptly correct their (import ban) measures," he said at a news conference.

South Korea is one of a handful of countries that have banned foods from Fukushima and surrounding prefectures.

China also bans seafood and other agricultural products from Fukushima and nine other prefectures, including Tokyo. It requires certificate on foods from the rest of Japan. The two governments recently set up a committee to discuss possibly easing the ban.

Taiwan, Hong Kong, Macau, and several other countries such as Singapore, Russia and the Philippines, also ban seafood and other agricultural products from Fukushima and surrounding prefectures. However they allow imports from elsewhere in Japan if they have a required certificate of safety. Taiwan has agreed to start easing restrictions later this year.

The U.S. does not impose a blanket ban on Fukushima, but instead restricts specific agricultural products from specific regions.

Since the accident, 26 countries have lifted bans on imports related to the Fukushima disaster.