This Slime Robot Could Grab That Thing You Swallowed

It has a distinct look.

Are you still waiting for that thumbtack you swallowed to make its way out? A new, very different kind of robot might be able to help with the process.

Researchers at the Chinese University of Hong Kong have created a magnetic slime robot by combining neodymium magnet particles with borax and polyvinyl alcohol. It’s a non-Newtonian fluid meaning it can act like a liquid and a solid. It can even heal itself if it’s cut into two or more pieces. And, I’m not the first person to point this out, but it looks like a turd.

By using a magnetic field, the slimebot can be manipulated to fit into tight spaces, change shapes and grasp objects similar to an octopus tentacle. That type of versatility makes it a promising technology for many applications but the researchers have envisioned the robot as a tool for non-invasive medical procedures.

That means that, if you can reconcile with the slime robot’s distinctly fecal appearance, you can use it to remove potentially harmful objects like small batteries if they’re accidentally swallowed. According to the Guardian, different pigments or dyes could be used at some point to give the slime a more appealing color.

For now, the slime lacks much autonomy and researchers have said much, much more research is needed before we’re anywhere close to being asked if the magnetic glop can enter your body to retrieve that Hot Wheels you ate. 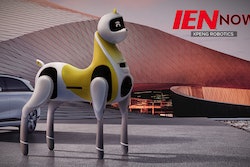