The fire is still burning.

On Sunday, a lightning strike set off a massive fire at National Salvage and Services' Selma Grinding and Sorting Operation in Burnsville, Alabama. Lightning reportedly hit the facility around 6:00 pm, and the fire is still burning.

Thousands of discarded railroad ties were set ablaze. The fire became so large that it was picked up by weather radar imagery.

According to local fire officials, nobody was injured in the fire. The company has about 25 employees, but no one was on site when the fire started.

Rain showers somewhat contained the blaze; however, despite the weather and some 50,000 gallons of water dumped on by firefighters, the fire raged on.

According to the company, the yard typically warehouses thousands of chemically-treated railroad ties. The materials are ground up and used to fuel industrial boilers, among other things. The ties generally are made of oak and are soaked in creosote, which makes them highly flammable, according to the Montgomery Advertiser.

At one point, the fire became so large and hot that firefighters had to back away and let it burn.

The company is still unaware of how much has been damaged but stressed that evacuations for residents were not needed.

The Valley Grande Volunteer Fire Department chronicled the fight on its Facebook page. The department hoped the rain saturated the ground enough to prevent further spread but noted that it would tend to the fire well into the week. Several volunteer fire departments responded to the call. 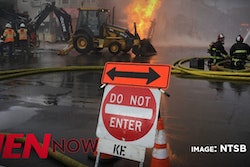 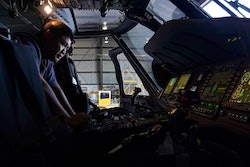