Could the rogue daredevil just be a mannequin attached to a drone?

Americans love a good mystery, especially one that involves an unidentified flying object. Just a guess, but the pandemic may have facilitated more than your average usage of the FBI’s online data vault as amateur sleuths finally had the time on their hands to really get at Roswell.

Meanwhile, a modern day uncertainty has been confounding airspace observers since August. That’s when pilots began spotting what appeared to be a man strapped to a jet pack, speeding through the blue ether at super high elevation. Besides the insanity of the spectacle itself, the jetpack-clad individual generated concern by flying far too close to incoming jets above LAX.

Initially the incident was pegged as a stunt. Some even dismissed it as if the pilot saw something very different, like a balloon or a small helicopter, even though he said the person with the jetpack was a mere 300 feet from his window as he approached landing. This was enough for the FBI to launch an investigation and not a moment too soon, as the craft was spotted again in October.

But it wasn’t til December that a pilot on a training flight for Sling Pilot Academy observed the jetpack and took video footage, at which point skeptics had no choice but to be silenced as they could view the object flying at 3,000 feet near Catalina Island.

And while the mystery has been sort of a fun distraction, it’s likewise alarming: observers wondered why a person with the knowledge and technical expertise to fly to those heights on such a craft would be careless enough to breach flight paths.

But recent reports might provide clues as to what’s really happening here.

Recently released information from The Black Vault, a website that houses declassified government documents, suggests that the media-dubbed “jetpack man” might not be a man at all. Instead, we might be seeing a life size mannequin that’s being jetted to the heavens by a drone, an explanation experts believe quite plausible considering jetpacks aren’t known for spending much time at very high altitudes due to the energy they require… not to mention they can be expensive and unreliable.

Conversely, drones, and dummies, are easy enough to get and mannequins are also known for being very brave… sounds like this one didn’t even blink an eye. 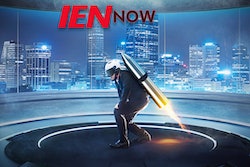