The U.S. military is getting serious about 'portable personal air mobility systems' for soldiers.

Whenever the conversation between my follow comic book nerds turns to the topic of super powers, my first choice is always the ability to fly. Maybe that’s why the concept of an individual jetpack has always intrigued me.

And now, finally, it seems that the U.S. military is getting serious about the potential of such a piece of equipment for its soldiers.

Earlier this month, the Defense Advanced Research Projects Agency, or DARPA, asked for research proposals focused on a portable personal air mobility system that could be used for special operations, search and rescue, urban combat, and logistics missions.

And although the proposal said the work could include concepts such as powered gliders, Falcon-inspired powered wingsuits, and parafoils, there’s definitely a slant towards a jetpack.

Additional parameters of the proposal included the ability to transport the system by one or a few people; a range of three miles; the ability to take off anywhere; and a composition that allows the unit to be assembled in less than 10 minutes with minimal tools.

Paraphrasing the DARPA spec, the system should be designed for the infiltration of hostile territory and greater off-road mobility. It can also be powered by electric batteries, hydrogen fuel cells or conventional fuel propulsion systems, as long as it doesn’t need wind or elevation to get going — so no jet-fueled hang gliders.

Finally, DARPA is requesting a low-infrared signature to avoid radar detection, but still simple enough that “relatively little training” would be needed to operate it.

Now, we just wait for the proposals to come in. 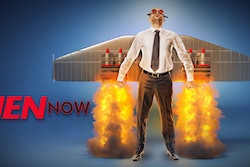