Businesses Warned Not to Participate in Syria Trade Fair

Russia, a key backer of Syrian President Bashar Assad, shot back, accusing the U.S. of undermining the reconstruction of Syria. 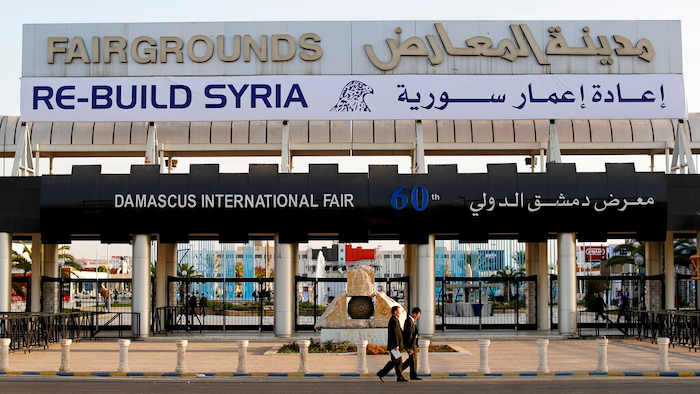 In this Oct. 2, 2018 file photo, Chinese visitors arrive to the opening of the Syria rebuilding exhibition, in Damascus, Syria. The U.S. Embassy in Syria on Wednesday, Aug. 28, 2019 posted a statement on Twitter that warned businesses from outside Syria against participating in an annual trade fare to be held in Damascus. It said anyone doing business with President Bashar Assad's government will expose themselves to the possibility of U.S. sanctions.
AP Photo/Hassan Ammar, File

BEIRUT (AP) — The United States warned businesses against taking part in an annual trade fare in the Syrian capital opening Wednesday, saying participants would expose themselves to the possibility of U.S. sanctions.

Russia, a key backer of Syrian President Bashar Assad, shot back, accusing the U.S. of undermining the reconstruction of Syria.

In a statement posted on Twitter, the U.S. Embassy in Syria, which closed the mission early on in the country's eight-year civil war, said it has received reports that some regional businessmen or chambers of commerce plan to participate in the Damascus fair.

"We reiterate our warning that anyone doing business with the Assad regime or its associates is exposing themselves to the possibility of U.S. sanctions," it said.

The Damascus International Fairgrounds, located near the city's international airport, is hosting the fair. Before the war started in 2011, the exhibition was a high-profile event, attracting major investors and celebrities from around the Arab world who performed to packed audiences on opening night.

The event was halted in 2001 as the country descended into conflict and rebels seized control of the eastern suburbs of Damascus, near the fairgrounds.

The fair resumed in 2017 for the first time since war broke out, an event hailed by officials as a victory and a sign of renewed confidence after rebels were ejected from the area around the capital following years-long fighting.

But participation has been largely confined to Syrian companies, followed by Lebanese and Iranian exhibitors and very few Russian, largely because of the challenges posed by international sanctions and the lack of a political solution to the conflict.

Sanctions by the U.S. have been in place since 2011 but were tightened by the Trump administration in the past year.

The U.S. statement said it is "unacceptable and inappropriate" for businesses and individuals to participate, "particularly at a time when the Assad regime and its allies Russia and the IRGC are attacking innocent civilians." The IRGC is an acronym for Iran's powerful Revolutionary Guard Corps, which is fighting alongside Assad's forces in Syria.

On its Facebook page, the embassy urged members of the public who have information on any businesses or individuals who plan to participate in the trade fair to email the U.S. Department of Treasury with the information.

China's ambassador in Damascus, Feng Biao, said the U.S. threats to impose sanctions on participants at the Damascus fair would not deter Chinese companies from taking part.

"Damascus international fair is considered as a source of power for the Syrian people and a window to develop Syria's economy," Feng said in an interview with the state news agency SANA late Tuesday, adding that 58 Chinese companies will take part in the fair this year.

The Russian Foreign Ministry accused Washington of attempting to sabotage the event. The U.S.'s "blatant attempts to undermine the Syrian leadership's reconstruction efforts are harmful to Syria's unity, sovereignty, and territorial integrity," the ministry said.