Just under half say they think the economy will expand 2% or more over the next year — sharply lower than the two-thirds who predicted so in January. 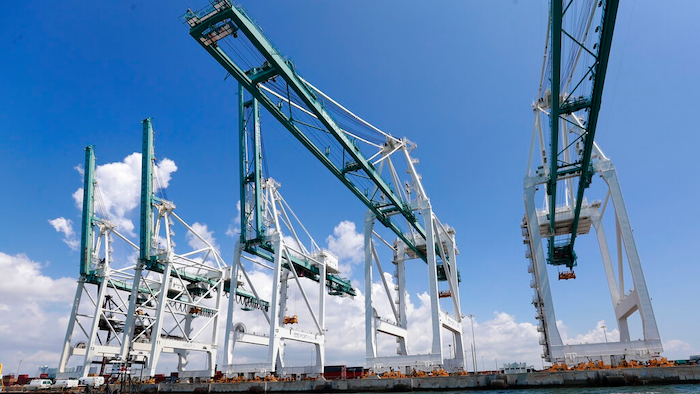 In this Wednesday, July 24, 2019 photo, large cranes to unload container ships are shown at PortMiami in Miami. According to the National Association for Business Economics quarterly survey, released Monday, July 29, U.S. business economists expect economic growth to slow this year, and a rising proportion of them think corporate sales and profits will decline.
AP Photo/Wilfredo Lee

WASHINGTON (AP) — U.S. business economists expect economic growth to slow this year, and a rising proportion of them think corporate sales and profits will decline.

The National Association for Business Economics said Monday that its quarterly survey of business conditions found that the Trump administration's tariffs on goods from China, Europe and other countries have disrupted the businesses of about one-fourth of its members.

Still, the survey also found that the NABE's member economists generally expect the economy to keep growing, albeit only gradually, and to avoid a recession in the next 12 months. Just under half say they think the economy will expand 2% or more over the next year — sharply lower than the two-thirds who predicted so in January.

Overall, the survey suggested that the economists, who work mainly for corporations and trade associations, expect the economy to cool in part because of the higher costs imposed on imported materials by Trump's tariffs. (The NABE says 119 of its members responded to the survey.)

The results echo the message from the government's report Friday on economic growth in the April-June quarter. The government estimated that growth slowed to a 2.1% annual rate from a 3.1% rate in the January-March quarter. Businesses cut back on their investment spending for the first time in three years, which most analysts attributed to a more cautionary strategy resulting from the trade war.

Overall, 28% of respondents said they thought the tariffs have had a negative impact on their business. That figure was much higher among manufacturers: Three-quarters felt the tariffs had hurt business. Factories have been hit hard by the administration's expanded taxes on imported steel and aluminum.

The survey also suggested that the job market may be cooling slightly. One-third of respondents said that they had hired during the April-June quarter, down from 44% who had said so a year earlier. And just below one-third said they expected to hire in the next three months, down from 41% a year ago.

There were some bright spots in the results: Nearly half the respondents expect business investment spending in buildings, equipment and software to increase in the July-September quarter. That's the highest proportion to say so in a year.