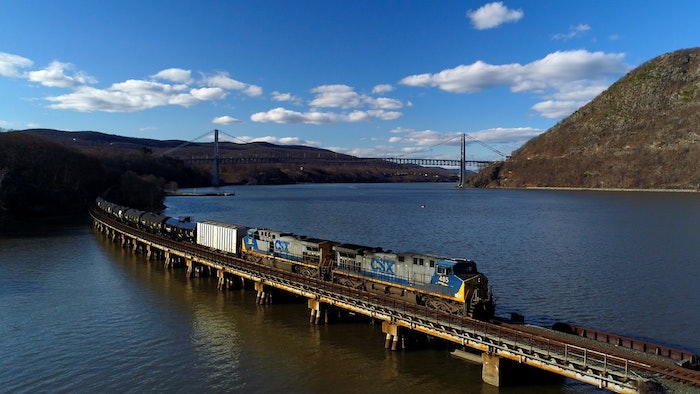 Railroads are warning investors that freight shipments will continue to fall this year as the Trump administration's trade fights hamper exports and cheap natural gas causes coal deliveries to dwindle.

CSX and Union Pacific both reported a slowdown in freight hauling during the second quarter. The railroads predicted freight volumes will fall further in the second half of the year. Bad weather and flooding have hurt crop production, which also impacts shipping volumes for the railroads.

The Association of American Railroads, which tracks the industry's weekly shipments, has reported declines for almost every category of product this year. Coal and grain, which account for a large part of the freight industry's revenue, have been particularly weak.

"At any point in time, some sectors of the economy are invariably doing better or worse than others," the Association of American Railroads said in its latest monthly report. "Unfortunately, right now it appears that sectors responsible for much of the rail traffic base are the ones doing poorly." Jacksonville, Florida's CSX is moving less coal because natural gas prices have fallen, making it a more affordable alternative. The ongoing U.S.-China trade war and other potential trade spats have also cut into shipping and cast a cloud over the industry's outlook.

The biggest drop in CSX's freight in the second quarter came in the intermodal category, where shipments of containers taken off ships. That number fell 10 percent.

Omaha, Nebraska-based Union Pacific said it expects to handle about two percent less freight during the second half of the year, but that decline should be offset by cost reductions. It expects that its workforce will be down 10 percent at the end of the year. The company expects productivity gains of at least $500 million over 2019.

China's trade with the U.S. plunged in June. Imports fell 31.4 percent and exports to the U.S. fell 7.8 percent according to Chinese customs data. The U.S. has imposed tariffs on $250 billion in Chinese imports, drawing retaliatory sanctions from Beijing on $110 billion in U.S. products. China also directed importers to find non-U.S. suppliers.

Both nations called a ceasefire to try to negotiate a resolution. But until they do, the trade war continues to threaten global economic growth and the railroads' bottom lines.