They likely won't go to prison.

Frank Jordans
This Thursday, Jan. 14, 2016, file photo shows the sign at the entrance to the headquarters of Sig Sauer, a gun manufacturer based in Newington, N.H. Three former executives of German gun-maker Sig Sauer have gone on trial in Germany on suspicion of illegally selling firearms to Colombia by funneling them through a U.S. sister company.
AP Photo/Lisa Marie Pane, file

BERLIN (AP) — Three former executives at German gun-maker Sig Sauer, including one who became CEO of a sister company in the United States, reached a deal with prosecutors over allegations they illegally exported arms to Colombia and likely won't go to prison, a court official in Germany said Wednesday.

Defense lawyers, prosecutors and judges agreed on a settlement that envisages suspended sentences and large fines for the men in return for extensive confessions, according to a spokeswoman for the regional court in the city of Kiel.

The court still needs to issue a verdict with sentences that spell out precise penalties, but the settlement agreement likely makes the procedure a formality, court spokeswoman Rebekka Kleine told The Associated Press.

The trial centered on the shipment of tens of thousands of semi-automatic pistols from Sig Sauer's factory in Germany to its sister company in the U.S. state of New Hampshire between 2009 and 2011.

Prosecutors said most of the SP 2022 pistols were subsequently forwarded to Colombia, in breach of an export license Sig Sauer had received from German authorities.

Neither Sig Sauer in Germany nor its U.S. affiliate, Sig Sauer Inc., immediately responded to requests for comment.

According to the preliminary settlement, the current chief executive of Newington, New Hampshire-based Sig Sauer Inc., Ron Cohen, would receive a suspended prison sentence of between 16 and 22 months and be required to pay a penalty of up to 900,000 euros ($1,024,740).

German news agency dpa reported that Cohen's lawyer said the 57-year-old was aware of the final destination of the pistols but hadn't considered this a problem because the sale was part of a U.S. government contract with Colombia.

During the time the weapons were sent to Colombia, the South American country's security forces were engaged in a decades-long conflict with guerrilla groups.

L&O Holding co-owner Michael Lueke, whose German company owns Sig Sauer and other arms manufacturers, would receive a suspended sentence of 9 to 11 months, a financial penalty of up to 900,000 euros and a separate fine based on his income. Court spokeswoman Kleine said that would likely amount to a "healthy sum."

A third defendant, whose name was given only as Robert L., would receive a suspended sentence of 8 to 11 months and a penalty of up to 90,000 euros, Kleine said. German media reported that the man no longer works for the Sig Sauer.

Another German court this month gave two former employees of gun-maker Heckler & Koch suspended sentences for their roles in the delivery of thousands of firearms that ended up in troubled areas of Mexico. The court also ordered the confiscation of proceeds from the sales totaling some 3.7 million euros ($4.2 million). 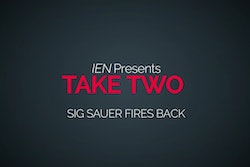 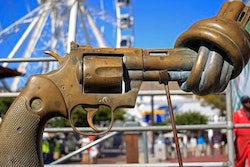