In New Orleans, port officials say a tariff-related drop in shipments is real, not merely a forecast. 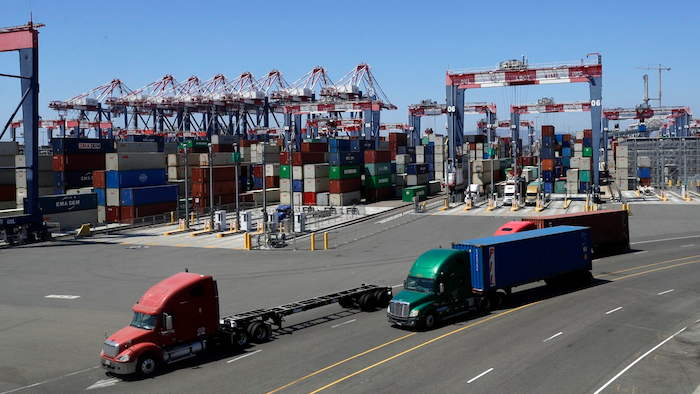 In this Wednesday, Aug. 22, 2018, photo trucks travel along a loading dock at the Port of Long Beach in Long Beach, Calif. Between them, the California ports of Los Angeles and Long Beach account for a large amount of the seaborne goods that the United States imports from China, and the prospect of a widening trade war between the global giants has port executives and longshoremen worried.
AP Photo/Marcio Jose Sanchez

Ports and ground terminals in nearly every state handle goods that are now or will likely soon be covered by import tariffs. Port executives worry that this could mean a slowdown in shipping that would have ripple effects on truckers and others whose jobs depend on trade.

The Associated Press analyzed government data and found that from the West Coast to the Great Lakes and the Gulf of Mexico, at least 10 percent of imports at many ports could face new tariffs if President Donald Trump's proposals take full effect.

Since March, the U.S. has applied new tariffs of up to 25 percent on nearly $85 billion worth of steel and aluminum and various Chinese products, mostly goods used in manufacturing.

Trump said in a recent tweet, "Tariffs are working big time." He has argued that the tariffs will help protect American workers and force U.S. trading partners to change rules that the president insists are unfair to the United States.

In New Orleans, port officials say a tariff-related drop in shipments is real, not merely a forecast. Steel imports there have declined more than 25 percent from a year ago, according to the port's chief commercial officer, Robert Landry.

The port is scouting for other commodities it can import. But expectations appear to be low.

"In our business, steel is the ideal commodity," Landry said. "It's big, it's heavy, we charge by the ton so it pays well. You never find anything that pays as well as steel does."

The port of Milwaukee imports steel from Europe and ships out agricultural products from the Midwest. Steel imports haven't dropped yet because they are under long-term contracts, said the port director, Adam Schlicht. But there has been "an almost immediate halt" in outbound shipments of corn because of retaliatory duties imposed by the European Union on American products.

Much of the corn, he said, "is just staying in silos. They are filled to the brim."

Many other ports have been humming along and even enjoyed an unexpected bump in imports during June and July as U.S. businesses moved up orders to ship before the new tariffs took effect. That started with manufacturing goods and is now spreading to retail items for back-to-school and Christmas.

"Some of my retail customers are forward-shipping the best they can to offset proposed tariffs," says Peter Schneider, executive vice president of T.G.S. Transportation, a trucking company in Fresno, California.

Port officials were encouraged by this week's announcement that the United States and Mexico had reached a preliminary agreement to replace the North American Free Trade Agreement, hoping it might lead to reduced trade barriers. Canada's participation in any new deal to replace NAFTA, though, remains a major question mark.

The port officials continue to worry, though, that Trump will make good on a plan to expand tariffs to an additional $200 billion in Chinese imports — a list that includes fish and other foods, furniture, carpets, tires, rain jackets and hundreds of additional items. Tariffs would make those items costlier in the United States. And if Americans buy fewer of those goods, it would likely lead to fewer container ships steaming into U.S. ports.

The impact will be felt keenly at West Coast ports like Los Angeles and Long Beach.

Los Angeles Mayor Eric Garcetti, relying on information from his port officials, said his port — the biggest in the United States — could suffer a 20 percent drop in volume if the additional $200 billion in tariffs are imposed against Chinese goods.

Jock O'Connell, an economist in California who studies trade, said he doubts a downturn would be so severe — that would match the slump that accompanied the global recession of 2008 — "but we will see a definite impact."

Here are some of the key findings from the AP analysis:

— U.S. tariffs will cover goods that are imported at more than 250 seaports, airports and ground terminals in 48 states.

— At 18 of 43 customs districts — including those representing ports around Los Angeles, San Francisco, New Orleans and Houston — at least 10 percent of their total import value could be covered by new tariffs if all Trump's proposals take effect.

— Retaliatory duties by China and other countries cover $27 billion in U.S. exports.

Eugene Seroka, executive director of the Los Angeles port, worries that "if tariffs make it too expensive to import, there will be an impact on jobs."

Seroka and others don't expect layoffs on the docks. Union longshoremen — whose average pay last year on the West Coast was $163,000, according to the Pacific Maritime Association, which negotiates for the ports — often have contract provisions ensuring that they are paid even if there's no work. And there are fewer of them than there were a few decades ago because the advent of shipping containers has reduced the need for people on the docks.

Dwayne Boudreaux, an International Longshoremen's Association official in Louisiana, said, though, that his stevedores are handling about 10 percent less steel from Japan because of the new tariffs.

"We don't think it's going to (get) worse," he said. But, he added, "who knows — that could change from the next press conference."

The impact might be greater on truck drivers and warehouse workers. Fewer will be needed, according to O'Connell.

Many drivers who deliver shipping containers from the dock to warehouses are independents contracted by trucking companies, and they don't get paid if there is nothing to haul. Some might leave the profession, said Weston LaBar, CEO of the Harbor Trucking Association in Long Beach, California.

"It's hard to retain drivers," he said. "If we don't have work for those drivers, we're worried they will leave for some other segment of the trucking business or go into another business, like construction."

Less shipping means less revenue for the ports — something that could limit their ability to pay for expansion and improvement projects, according to Kurt Nagle, president of the American Association of Port Authorities. He said U.S. ports are in the midst of a planned $155 billion in infrastructure spending from 2016 through 2020.

The current trade war was foreshadowed in January by steep U.S. tariffs on imported solar panels and washing machines. It exploded with the U.S. tariffs of 25 percent on imported steel and 10 percent on aluminum. Then came two rounds of duties targeting about $50 billion in imports from China — punishment against that country for pressuring U.S. companies to transfer technology and intellectual property to Chinese companies.

Along the way, China, the European Union, Turkey, Canada and Mexico imposed retaliatory duties on U.S. goods including farm products and Harley-Davidson motorcycles.

This week, the U.S. Trade Representative's office finished six days of hearings on a plan to hit another $200 billion in Chinese imports with 10 percent duties. Trump has said that if China continues to retaliate he could eventually add tariffs on $450 billion in Chinese goods, nearly 90 percent of that country's 2017 exports to the U.S.

Milwaukee's port director worries, however, that damage from the current trade dispute could linger. Canada is increasing corn exports to Europe, and Brazil is trying to pick up the slack in soybean exports to China.

"Others are already picking up that business," Schlicht said.