If the current lock were disabled for an extended period, the bottleneck could devastate automaking and other industries. 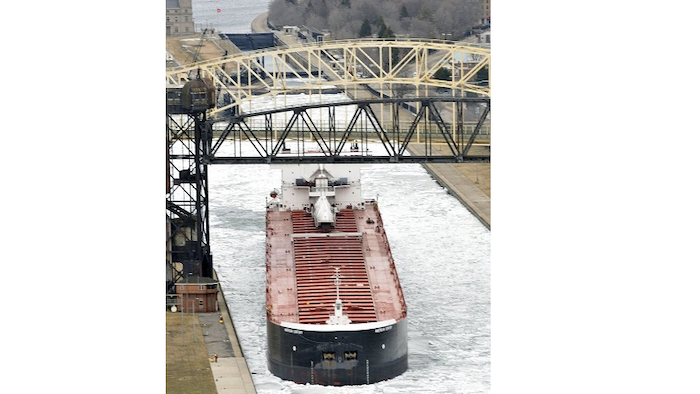 In this April 22, 2014 file photo, the carrier American Century moves out of the Soo Locks in Sault Ste. Marie, Mich., headed into Whitefish Bay, where an icebreaker escort awaits to lead the ship and others across the ice-clogged Lake Superior. Michigan officials say the federal government is taking a big step toward approving a long-sought project to boost cargo shipping on the Great Lakes. Gov. Rick Snyder and members of Congress say a U.S. Army Corps of Engineers report improves prospects for constructing a second navigation lock that can accommodate the largest vessels hauling iron ore and other cargo between Lake Superior and the other lakes.
AP Photo/John L. Russell, File

The report by the U.S. Army Corps of Engineers boosts a key benefit-cost score for the proposed project at the Soo Locks on the St. Marys River between Lake Superior and Lake Huron.

A Corps spokesman declined comment ahead of the report's official release. But The Associated Press obtained a summary from the Lake Carriers' Association, which represents U.S.-flagged cargo vessels on the Great Lakes.

"The strategic importance of the Soo Locks cannot be overstated," James Dalton, the Corps' director of civil works, said in an accompanying memo.

The complex at Sault Ste. Marie, Michigan, consists of several locks that raise and lower vessels between the two lakes, which have a 23-foot elevation difference. But just one — the Poe Lock — can accommodate modern freighters up to 1,000 feet long that haul iron ore between mines in Minnesota and Michigan's Upper Peninsula to Midwestern steel mills.

If the Poe were disabled for an extended period, the bottleneck could devastate automaking and other industries, according to business leaders and elected officials who have long pushed for a second Poe-sized lock.

The project has been hampered by a cost-benefit rating of 0.73 from the Corps, far below the level needed to justify federal funding. The new report sets the rating at 2.42, more than three times higher.

The upgrade doesn't guarantee that construction will go forward. Funding from Congress would be needed during the estimated 10-year construction period and White House support would be essential. President Donald Trump said he wanted to "fix" the locks during a visit to Michigan in April.

But supporters said the new rating should help break a logjam that has blocked the project since it obtained congressional authorization — but no money — in 1986.

"It is no longer a question of if it should be built," said Jim Weakley, president of the Lake Carriers' Association. "It is now a question of how quickly we get it built."

Snyder and state legislative leaders recently committed $50 million toward the upgrade. The Republican governor said Friday the Corps report "reinforces the pivotal role the locks play in our economy and the need to make this upgrade a priority for funding."

The project has drawn bipartisan support from Michigan's congressional delegation.

"We know the Soo Locks is a vital gateway for commerce in Michigan and critical to our national security," Democratic Sen. Debbie Stabenow said.