The announcement comes as Beijing tries to rally foreign support in its dispute with Trump over U.S. tariff hikes. 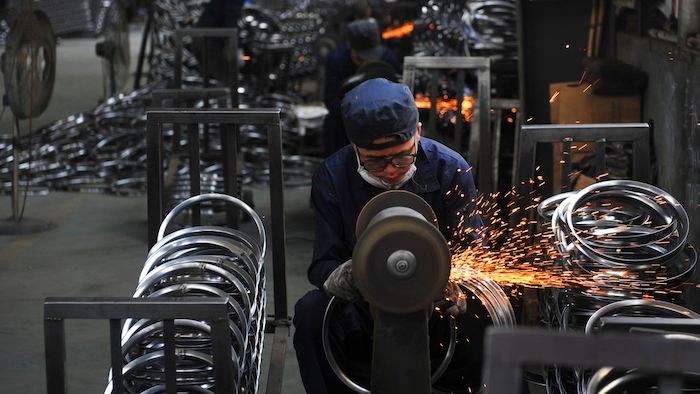 In this June 4, 2018, photo, a worker wields steel wheel rims at a factory in Hangzhou in east China's Zhejiang province. China launched a trade investigation Monday, July 23, 2018 of steel from Europe and South Korea, potentially complicating efforts to recruit them as allies in its tariff dispute with U.S. President Donald Trump.
Chinatopix via AP

BEIJING (AP) — China launched a trade investigation Monday of steel from Europe and South Korea, potentially complicating efforts to recruit them as allies in its tariff dispute with U.S. President Donald Trump.

The Commerce Ministry said it will look into whether some stainless steel products from the European Union, South Korea, Japan and Indonesia are sold at improperly low prices and should be subject to anti-dumping duties.

The announcement comes as Beijing tries to rally foreign support in its dispute with Trump over U.S. tariff hikes imposed in response to complaints Beijing steals or pressures foreign companies to hand over technology.

Chinese leaders have tried, so far in vain, to appeal to European leaders and South Korean businesspeople by promising to increase imports — a step that would be set back if duties on steel increased.

European and other leaders criticize Trump's tactics but many share U.S. criticisms of Chinese market barriers and industrial policy.