Trade War 'On Hold,' But There Could Be Tensions in the Future

Treasury Secretary Steve Mnuchin said talks made "meaningful progress," but they gave no indication of how close they might be to an overall settlement. 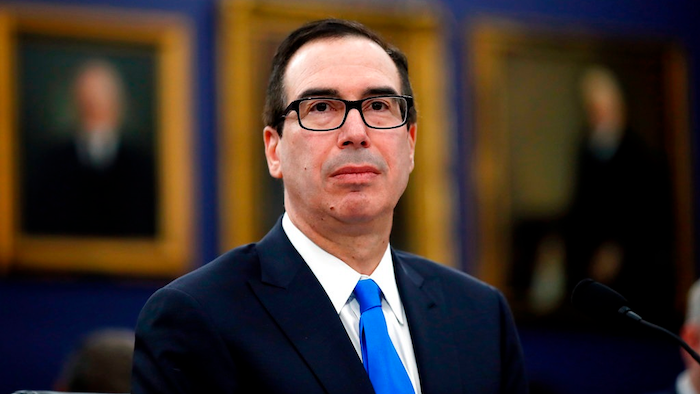 Treasury secretary Steve Mnuchin met with leaders in China in attempt to stave off a trade war.
AP file

BEIJING (AP) — China's government said Monday it cannot guarantee that renewed trade tension with Washington can be avoided after U.S. Treasury Secretary Steven Mnuchin declared a temporary truce in a spiraling dispute that prompted worries of a chilling of global commerce.

Mnuchin said Sunday the two sides were "putting the trade war on hold" following an announcement Beijing would "significantly increase" purchases of American farm goods, energy and other products and services. But the two sides gave no indication of how much progress they had made toward ending the dispute over U.S. complaints about market access and technology policy.

Mnuchin's comments showed both sides hope to avoid a "trade war," said a Chinese foreign ministry spokesman, Lu Kang. However, he added, "Given the increasing interaction between the two countries, we cannot assure you they will not encounter more frictions or disputes in the future."

U.S. President Donald Trump has threatened to raise import duties on Chinese goods worth up to $150 billion in response to complaints Beijing steals or pressures foreign companies to hand over technology in exchange for market access. Chinese leaders issued their own $50 billion list of U.S. goods for possible retaliation.

Trump is pushing for Beijing to discard or scale back ambitious technology and industrial development plans Washington complains will hamper market access and hurt foreign competitors. Businesspeople and economists say Communist leaders who see their development model as a success are unlikely to agree to more than minor changes.

In a statement Saturday, the two countries made no mention of those underlying American complaints. Mnuchin said talks made "meaningful progress," but they gave no indication of how close they might be to an overall settlement.

The truce is likely to be only temporary due to unresolved "structural issues" between China and the United States, said Shi Yinhong, director of the Center for American Studies at Renmin University in Beijing.

"I don't think the truce will last very long," Shi said. "The antagonism in trade will ebb and flow in China-U.S. relations in the long term."

Lu, the Chinese spokesman, said Beijing wants to preserve a relationship that benefits both sides.

"If the two governments can reach an agreement which is acceptable to both sides, the two governments should certainly abide by it," Lu said at a regular briefing. "We believe this result will be welcomed by the peoples and business communities in the two countries, and the international community."

"Big risk factors" include whether China will take action fast enough on its trade surplus and whether the two sides can establish a dialogue to discuss structural issues, said Jacob Parker, vice president for China operations of the U.S.-China Business Council.

As for the United States, "there is a lot of different dynamics at play and many different stakeholders in Washington," Parker said. "So finding a consensus from the Trump administration to ensure a unified policy in engaging with China will be critical for the two sides to come to an agreement."