Another Trade War, This Time with Rwanda

The U.S. is being called a "bully" for retaliating against Rwanda's efforts to grow its own textile industry. 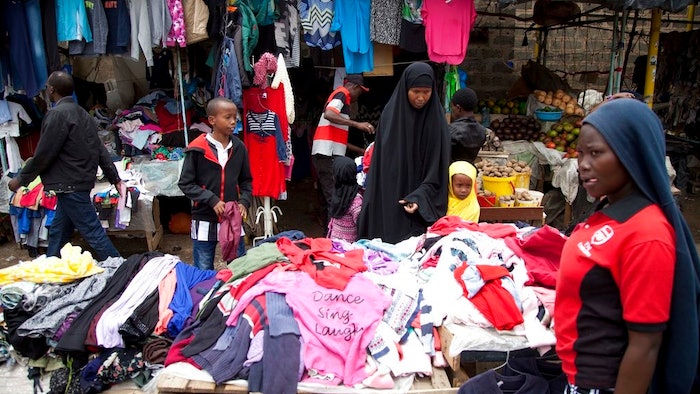 In this Sunday April 8, 2018 people look through piles of second hand clothes at a roadside stall, in Nairobi, Kenya. The used clothes cast off by Americans and sold in bulk in African nations, a multimillion-dollar business, have been blamed in part for undermining local textile industries.
AP Photo/Sayyid Abdul Azim

KAMPALA, Uganda (AP) — The sweaty mechanic tossed aside the used jeans one by one, digging deep through the pile of secondhand clothes that are at the center of another, if little-noticed, Trump administration trade war.

The used clothes cast off by Americans and sold in bulk in African nations, a multimillion-dollar business, have been blamed in part for undermining local textile industries. Now Rwanda has taken action, raising tariffs on the clothing in defiance of U.S. pressure. In response, the U.S. says it will suspend duty-free status for clothing manufactured in Rwanda under the trade program known as the African Growth and Opportunity Act.

President Donald Trump's decision has not gone down well in Rwanda, a small, largely impoverished East African nation still trying to heal the scars of genocide 24 years ago. Similar U.S. action against neighboring countries could follow; Uganda and Tanzania have pledged to raise tariffs and phase in a ban on used clothing imports by 2019.

The action against Rwanda comes just weeks after Trump met Rwandan President Paul Kagame at the World Economic Forum and proclaimed him a "friend," as Trump sought to calm anger in Africa over his reported vulgar comments about the continent. Kagame currently chairs the African Union, where heads of state just days after the meeting drafted, but decided against issuing, a blistering statement on Trump.

The U.S. trade action is finding a mixed response in Africa, with some upset at Trump again, while others defend the secondhand clothing as popular, inexpensive and well-made.

The U.S. is a "bully" for retaliating against Rwanda's efforts to grow its own textile industry, said Dismas Nkuranga, who deals in secondhand footwear in Rwanda's capital, Kigali.

"The main objective for Rwanda is to see more companies in the country produce clothes here," said Olivier Nduhungirehe, state minister for foreign affairs. "It's also about giving Rwandans the dignity they deserve, not wearing secondhand clothes already used by other people."

But at the sprawling Owino Market in neighboring Uganda's capital, Kampala, the trade in used clothing continues to crackle, with some sellers shoving merchandise into the arms of shy potential buyers: a pair of jeans for a fraction of a dollar, a T-shirt for even less.

"Affordability is what I want," said John Ekure, the mechanic who was shopping for jeans.

As some African governments worry that the bulk imports of used clothes constitute dumping, others question the ability of local clothing makers to satisfy appetites for quality goods at rock-bottom prices.

Rwanda has been supporting Chinese investors to set up textile factories in the hopes that the country eventually can produce affordable products and create 350,000 jobs by 2025. But many in Rwanda who praise the government's decision to raise tariffs as progressive remain concerned about whether that goal can be reached.

In Uganda, where the per capita income is $615, traders and buyers said they hope the government will not move as swiftly as Rwanda in imposing higher tariffs on used clothes.

One trader said he had noticed a rise in the number of Rwandans coming to his stall to check out trench coats and jackets, apparently because such goods have become rare back home.

"If they are telling us they are going to create many industries making clothes, I can tell you they don't have the capacity to do that," Muhammad Kiyingi said of Uganda's government. "Somebody should tell the government to think carefully."

He predicted that tightening restrictions on imports of used clothing from the U.S. would lead to a spike in imports from places like China and the United Arab Emirates instead.

Following Rwanda's lead would "cause more harm than good," said Ramathan Ggoobi, an economist at Uganda's Makerere University. "We have not yet built capacity to produce new products ... so we would be protecting an inefficient producer."

To satisfy the demand for Western fashion, African governments could offer incentives for Western textile companies to set up factories on the continent, said Uche Igwe, an analyst who advises the government in Nigeria, Africa's most populous country.

"It is nice to grow our domestic industries and create employment," he said. "However, we must first fix our infrastructural deficits so that local producers will produce at competitive costs."