Global business is catching a chill from China's virus outbreak. 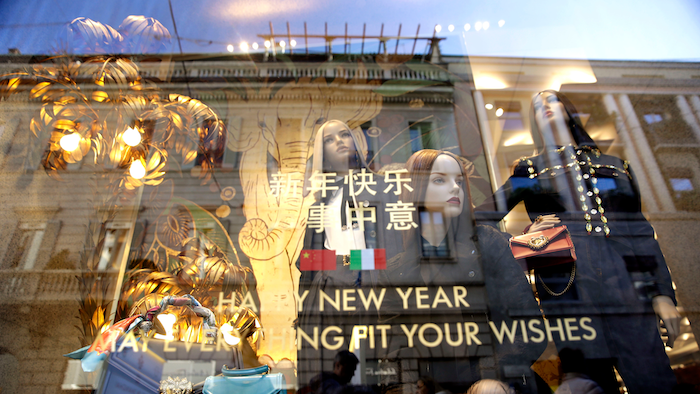 Dummies are displayed in a fashion shop at the Montenapoleone shopping district, in Milan, Italy, Tuesday, Feb. 4, 2020.
AP Photo/Luca Bruno

Mink breeders in Denmark called off a fur auction because Chinese buyers can’t attend due to travel curbs imposed to contain the disease.

Airlines have canceled 25,000 flights to and within China after ticket sales collapsed, according to travel data provider OAG. General Motors Co. and other automakers are telling employees to limit travel to China, their biggest market.

On Tuesday, the Chinese gambling enclave of Macau announced it was closing casinos for two weeks as a precaution. The territory is a big moneymaker for U.S. casino operators Wynn Resorts Ltd. and Las Vegas Sands Corp.

Global companies increasingly rely on China, the world's No. 2 economy, as a major buyer of food, cars, movie tickets and other goods. But that has left them more exposed than ever to the pain of its latest abrupt slump.

The Singapore Air Show, due to open next week, announced Tuesday it is canceling a business conference due to the absence of Chinese participants.

Tourism revenue in Thailand and other Asian destinations that rely on China for up to 30% of their foreign visitors plunged after Beijing canceled group tours. Businesspeople were told to put off foreign trips.

“Many national as well as international events are now already canceled,” the chief executive of Kopenhagen Fur, Jesper Lauge Christensen, said in a statement.

The cooperative of 1,500 Danish breeders who account for 40% of global mink production called off this month's auction of 2 million skins. Most of the group's exports usually go to China and Hong Kong.

Italy could lose up to 4.5 billion euros ($5 billion) in tourism revenue this year as virus fears keep visitors away, polling agency Demoskopika said in a study released Tuesday.

In Milan’s luxury MonteNapoleone shopping district, dozens of luxury brands decked out their windows for Chinese New Year. But wealthy Chinese shoppers have failed to arrive in their usual numbers.

The Italian National Fashion Chamber estimated that industry sales will decline 1.8% in the first six months, because of the virus. It had been expected to grow 3%.

Chinese visitors are responsible for about one-third of all luxury purchases globally. In Italy, they spend more than Russians, Arabs and Americans combined.

Chinese authorities have suspended most access to Wuhan, a manufacturing center at the center of the outbreak, and surrounding cities in Hubei province with a total of 50 million people.

The eastern city of Hangzhou, the home of e-commerce giant Alibaba Group and a center for telecom technology companies, imposed restrictions on movement in the city and said checkpoints will be set up to examine passersby for the infection's fever.

The government extended the end of the Lunar New Year holiday to keep the public at home and reduce chances infection might spread.

China already was dealing with the impact of a tariff war with Washington and a separate outbreak of African swine fever that does not infect people but has disrupted pork supplies, causing food prices to soar.

Streets and subways in many cities are still largely empty even after most of China officially returned to work this week. Thousands of restaurants and cinemas have been closed to prevent crowds from gathering. Hollywood studios lost Lunar New Year ticket sales, usually a revenue high point for the industry.

Officials express confidence China can weather the latest trouble but forecasters say it could knock up to 1 percentage point off this year’s growth, which might fall to as low as 5.2%. The economy already was expected to slow after hitting a multi-decade low of 6.1% last year.

Forecasters including Barclays and Morgan Stanley say the outbreak could depress this year's global economic growth by 0.2 to 0.4 percentage points.

This time, even if China recovers quickly, the worldwide impact could be bigger than SARS, forecasters say. That is because China now accounts for 16.3% of global economic activity, more than triple 2003’s share of 4.3%, according to the International Monetary Fund.

The anti-virus measures will drag down Chinese activity this quarter, which “will pose pressure on the global economy and spark fears in financial markets,” Louis Kuijs, head of Asia economics for Oxford Economics, said in a report.

The lockdown of Wuhan, a manufacturing center of 11 million, has disrupted production of liquid crystal and light-emitting diode panels, according to IHS Markit technology research, now a part of Informa Tech. That has depressed supplies and pushed up prices for manufacturers that use them in computer displays, TV sets and other products.

As the curbs wear on, the impact could spread, depressing auto production and sales and prices of oil, iron ore and other materials from Australia, Brazil and African suppliers to China's huge industries, forecasters say.

China is the world’s biggest importer of many commodities, including oil. The price of Brent crude, the benchmark for international oil trading, has fallen to about $55 per barrel from $70 in early January, partly due to weak Chinese demand.

Lower oil prices mean cheaper gas for Western consumers but they hurt exporters such as Indonesia that use the revenues to help pay for schools, health care and social services.

Demand and prices “will depend on how quickly transportation and industrial activities will return to normal levels,” Fitch Ratings said in a report.

Even smaller companies are directly affected by the outbreak because of increasingly tight links with China’s nimble, efficient manufacturers.

Many manufacturers have yet to feel the impact, because factories closed for up to three weeks ahead of the Lunar New Year holiday. But forecasters say delays in reopening will quickly depress demand for imported components and materials such as copper and steel.