The challenge is that most Americans put a high premium on saving money, which makes them more likely to choose less expensive goods from abroad. 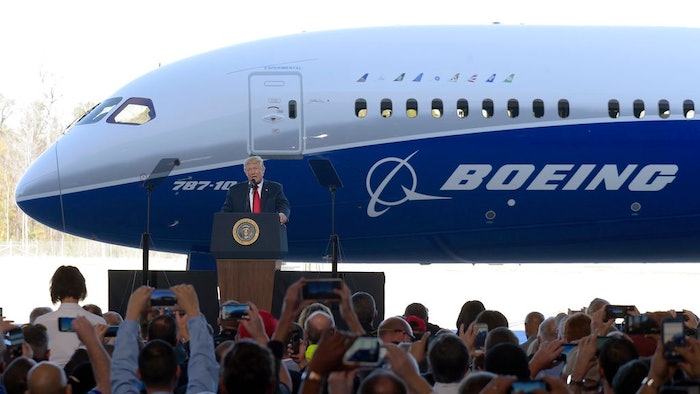 In this Friday, Feb. 17, 2017, file photo, U.S. President Donald Trump speaks in front of a Boeing 787 Dreamliner while visiting the Boeing South Carolina facility in North Charleston, S.C. Trump’s push to get Americans to embrace goods “Made in USA” is harder than it looks. Few products are American-made only. Trump himself signs laws with gold-plated pens assembled in Rhode Island but lacquered and engraved in China. He praises U.S. industrial might in front of a Boeing jet whose parts are 30 percent foreign-made. And there’s a good reason why this is the case: U.S. manufacturers rely on global supply chains and Americans buy foreign goods because they prefer lower prices.
AP Photo/Susan Walsh, File

WASHINGTON (AP) — President Donald Trump's push this week to get Americans to buy goods "made in America" is harder than it might seem.

The gold-plated pens the president uses to sign laws are assembled in Rhode Island but lacquered and engraved in China. The Boeing jet he posed with to showcase America's industrial might is 30 percent foreign-made. The firetruck the administration parked at the White House this week to promote U.S.-made goods gets about 10 percent of its parts from abroad.

Fact is, in a 21st century global economy, few products are exclusively American-made. U.S. manufacturers rely on global supply chains and many people buy foreign goods for the simple reason that they value lower prices.

Even for people who prefer to buy America-only, it is increasingly hard to identify which products qualify as such.

Promoting American-made products is "catnip" to politicians, notes Dan Ikenson, a trade analyst at the libertarian Cato Institute. But it comes at a price:

"When people feel compelled to buy local, buy American, they generally spend more money, which means they have less to spend on other things or to save," Ikenson says.

In his celebration this week of American-made products this week, Trump has yet to acknowledge such nuances. He has argued instead that buying exclusively American will create more national wealth.

"From Day One, my administration has been fighting to bring back our manufacturing jobs and crack down on foreign countries that cheat — a lot of them," Trump said at a White House event Wednesday with manufacturers. "We will end the theft of American prosperity."

On Monday, Trump also went beyond saying he would protect the U.S. manufacturing sector. He also pledged a crackdown on "the predatory online sales of foreign goods" that he said are "absolutely killing" U.S. retail stores.

The challenge for Trump is that most Americans put a high premium on saving money, which makes them more likely to choose less expensive goods from abroad.

Last year, an Associated Press-GfK poll found that Americans said they preferred to buy foreign-made goods over identical American-made goods if the foreign products were cheaper. Asked to choose between $50 pants made in another country and an identical $85 pair made in the United States 67 percent say they'd buy the cheaper pair from abroad.

The survey found that household income made little difference in such preferences. Americans in households earning more than $100,000 a year were no less likely than lower-income people to say they'd go for the lower-priced good from abroad.

Research by Amit Khandelwal, an economist at Columbia University, found that inexpensive imports disproportionately benefit poorer Americans who can struggle to afford daily expenses. Lower-paid households devote a greater portion of their earnings to such basic goods as food and clothing, whose prices often reflect inexpensive supplies from overseas, Khandelwal found. By contrast, more affluent households tend to spend more on services insulated from foreign trade, from gym memberships to child care.

If Trump were to raise tariffs on some imports, as he has proposed to do to encourage U.S.-made goods, lower-income households would struggle with higher prices, Khandelwal said.

"It's going to hurt the poor more than it hurts the rich," he said.

Companies, under intense competitive pressure to keep prices low, often turn to factories and suppliers in such countries as China and Bangladesh, where wages are much lower and benefits often nonexistent. The famed American outdoors retailer L.L. Bean, which has been endorsed by Trump himself, estimates that it imports about 75 percent of its products, though its signature boots are still American-made.

Companies that have tried to move more of their production back to the United States from abroad have often had to shoulder higher costs. The Bollman Hat. Co., which makes the kangaroo-logo Kangol caps worn by celebrities like Samuel L. Jackson and Brad Pitt, moved into a Pennsylvania factory last year from China. It has since struggled to turn a profit.

The cost per hat is twice as high as it was in China — though the gap is narrowing — partly because the Pennsylvania workers don't yet work as fast as the experienced workers at a now-closed plant in southern China.

More broadly, the globalization of manufacturing has complicated efforts to identify which products truly are Made-in-America.

Consider cars. American University's Kogod School of Business and the website Cars.com conduct separate annual efforts to single out which cars are the most American-made. They sometimes produce conflicting results. This year, the Chevrolet Traverse, Buick Enclave and GMC Acadia stand atop the American University list. Cars.com singles out the Jeep Wrangler, Jeep Cherokee and Ford Taurus.

When Cars.com unveiled its list 11 years ago, more than 60 vehicles earned the American-made label. Because of globalization, the number qualifying under the original criteria fell to eight last year.

So the website has changed its rules. Now, more than 30 cars meet the standard.

'Made in America Week'