AP: Trade War with Mexico Could Increase Migration to U.S.

A trade war with Mexico "drives down the peso and drives down opportunities for Mexicans to make a living in honest manufacturing jobs," said one expert. "There will be more desperate Mexicans crossing the border." 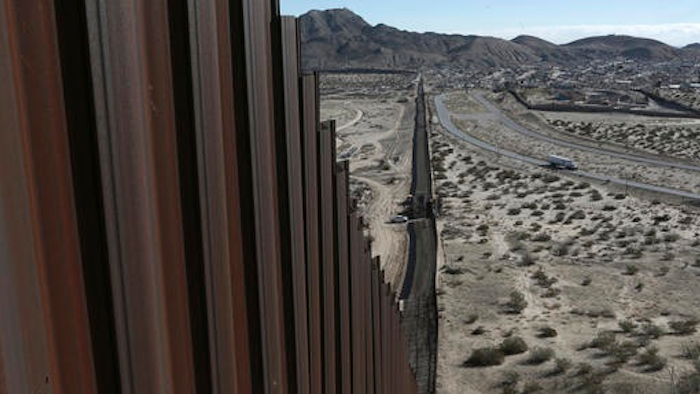 In this Jan. 25, 2017 photo, a truck drives near the Mexico-US border fence, on the Mexican side, separating the towns of Anapra, Mexico and Sunland Park, New Mexico.
AP Photo/Christian Torres

MEXICO CITY (AP) — If President Donald Trump makes good on threats to gut NAFTA and impose stiff tariffs on Mexican goods, economists say he risks a trade war that could lead to the very thing he is hoping to avoid — a huge surge in Mexican migration to the United States.

The result would be catastrophe for the Mexican economy. Recession. A dramatic weakening of the peso, even below the historic lows it has already set amid Trump's bellicose rhetoric. Soaring inflation, interest rates and unemployment.

"Mexico is smaller than the U.S. and can be harmed by conflict more than the U.S. would be," said Adam Posen, president of the Peterson Institute for International Economics, a Washington think tank that supports free trade.

A trade war with Mexico "drives down the peso and drives down opportunities for Mexicans to make a living in honest manufacturing jobs," he added. "There will be more desperate Mexicans crossing the border."

And the U.S. would by no means be immune from the fallout.

Mexico is the United States' third-largest trading partner for goods, and the two countries did some $583.6 billion in total cross-border commerce in 2015, according to the Office of the United States Trade Representative. That included a U.S. goods and services trade deficit of $49.2 billion. America buys about 80 percent of Mexico's exports, with automobiles, electrical machinery and fuels topping a long list that also includes agricultural goods such as fruit, vegetables, wine and beer.

The Trump administration's proposal this week for a 20 percent tax on imports from Mexico to pay for the promised border wall was quickly walked back by officials as just one of multiple "options."

It could also face stiff opposition in Congress including from Republicans who favor free trade. Sens. John McCain and Jeff Flake of the border state of Arizona have publicly come out in support of NAFTA. McCain noted that it has increased his state's exports to Mexico and Canada by $5.7 billion, or 236 percent, since its enactment in 1994.

The worst case scenario of a trade war is frightening to contemplate, economists say.

If the U.S. were to slap a tax on Mexican imports, it would violate the terms of NAFTA and nullify the pact, said Alfredo Coutino, Latin America director at Moody's Analytics.

Mexico could impose retaliatory tariffs. Uncertainty would spook investors and businesses, including U.S. companies with operations in Mexico that could pull out.

The peso, already sorely weakened at about 21 to the dollar, could fall to 25, 28 or even lower, Coutino continued. Unemployment would rise. Mexicans' real purchasing power would plummet as a result, and inflation could soar to double digits by the end of the year. Interest rates could also top 10 percent. The Mexican government would be forced into fiscal tightening measures, putting additional downward pressure on the economy and throwing it into recession.

America would suffer too, but not as much. Moody's forecasts that a trade war would slightly reduce U.S. economic growth and cost 300,000 American jobs after a year.

Mexico has been here before, most notably when a sharp peso devaluation in 1994 touched off a nearly 6 percent economic contraction.

Hundreds of thousands of Mexican job-seekers poured over the border into the United States, one of the reasons the U.S. organized a $50 billion International Monetary Fund bailout of its southern neighbor in 1995.

If the U.S. economy keeps improving while Mexico's tanks, experts say, expect more of the same. And bulking up the physical barrier may not keep migrants out, with some estimates saying 40 percent of illegal immigration results from people who come to the U.S. legally and then overstay their visas. Canada does not require visas of Mexican citizens, so there's nothing to stop people from flying to Canada and crossing the United States' porous northern frontier.

Critics say the U.S. president's obsession with illegal migration from Mexico ignores the fact that the phenomenon has waned in recent years, and point to the irony that his policies could reverse that trend. The Pew Research Center reported in November that the number of unauthorized Mexican immigrants in the U.S. fell from 6.95 million in 2007, to 5.85 to million in 2014.

Coutino predicted that economic chaos in Mexico would strengthen the cartels that traffic drugs into the U.S. — another stated target of the border wall — as unemployed people are more vulnerable to recruitment by the gangs.

"You will have a neighbor to the south of your border with unemployment, with social problems, with rising criminality," Coutino said. "Do you want to have a neighbor like that? That's the question that Trump and his team should be asking themselves."