Father of Injured Pipeline Protester Says She May Lose Arm

Protesters and law enforcement gave conflicting accounts about what might have caused the explosion that injured her. 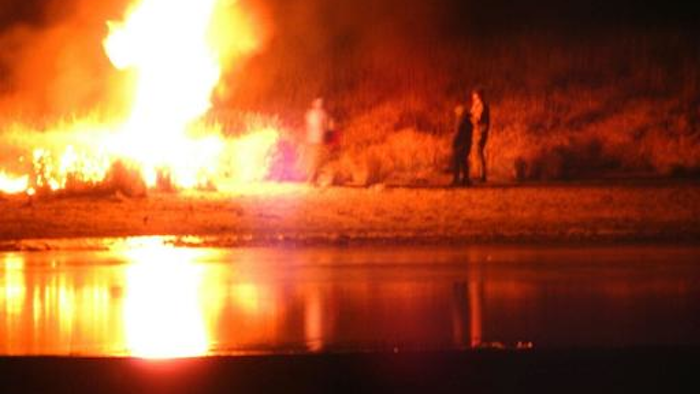 Law enforcement and protesters clash near the site of the Dakota Access pipeline on Sunday, Nov. 20, 2016, in Cannon Ball, N.D. The clash came as protesters sought to push past a bridge on a state highway that had been blockaded since late October, according to the Morton County Sheriff's Office.
Morton County Sheriff’s Department via AP

BISMARCK, N.D. (AP) — A New York woman seriously hurt protesting the Dakota Access oil pipeline faces multiple surgeries and could lose an arm, her father said Tuesday, and protesters and law enforcement gave conflicting accounts about what might have caused the explosion that injured her.

Sophia Wilansky, 21, was listed in serious condition and was undergoing surgery at a Minneapolis hospital.

Wilansky's father, Wayne Wilansky, said his daughter was hurt when law enforcement threw a grenade. The Morton County Sheriff's Office maintains authorities did not use concussion grenades or any devices that produce a flash or bang during a clash late Sunday and early Monday near the camp along the pipeline route in southern North Dakota where protesters have gathered for months.

The sheriff's office suggested in a statement Monday that an explosion heard during the skirmish might have been caused by small propane tanks that authorities said protesters had rigged to explode.

Dallas Goldtooth, a protest organizer with the Indigenous Environmental Network, did not immediately respond to a request for comment Tuesday. Wayne Wilansky disputed the claim by authorities, saying "there's multiple witnesses and my daughter, who was completely conscious, said they threw a grenade right at her."

The North Dakota Highway Patrol in a statement Tuesday backed up the sheriff's office's version of events, saying officers during the skirmish spotted protesters with "multiple silver cylinder objects."

"It was at this time an explosion occurred and several protesters ran to the area, pulled a female from under the burned vehicle, and fled the scene," the patrol said.

Officers who investigated found 1-pound propane tanks "including one that appeared to be intentionally punctured," the agency statement said.

During the clash, officers using tear gas, rubber bullets and water sprays against protesters who they say assaulted officers with rocks, asphalt, water bottles and burning logs. One officer was injured when struck in the head with a rock. At least 17 protesters were injured severely enough to be taken to hospitals, according to Goldtooth.

Wayne Wilansky denounced the law enforcement tactics, saying "this is not Afghanistan, this is not Iraq. We don't throw grenades at people."

A GoFundMe account for Wilansky had raised more than $194,000 in 18 hours, with more than 7,200 people contributing. It was the highest trending account on Monday night, according to GoFundMe spokeswoman Kate Cichy.

The $3.8 billion pipeline to carry North Dakota oil to a shipping point in Illinois is largely complete outside of a stretch under a Missouri River reservoir in North Dakota near the Standing Rock Sioux Reservation. The tribe and others have been opposing the construction for months, saying the pipeline threatens the tribe's drinking water along with American Indian cultural sites.

Protests have intensified as the dispute plays out, with total arrests since August reaching 528 on Monday.

North Dakota officials may need to borrow more money to police protests, with costs exceeding the $10 million in emergency spending authorized by the state.

Fong said it's "very likely" officials will go back to the state's Emergency Commission to request more money.

Kelcy Warren, CEO of pipeline developer Energy Transfer Partners, told The Associated Press last Friday that he made a verbal offer to reimburse the state for policing costs during an earlier conversation with Gov. Jack Dalrymple.

Dalrymple's spokesman, Jeff Zent, said the governor doesn't recall Warren making an offer and that even if one was made, it's unclear whether the state could legally accept it.

"The bottom line is the governor has not received a formal (offer), nor are we seeking one out," Zent said, adding that "our focus is to continue to press the Obama administration to help cover these costs."