Mexico Seeks to Push Ahead on TPP without U.S.

But it's unclear whether they'll succeed, based on terms in the TPP agreement that could prevent it. 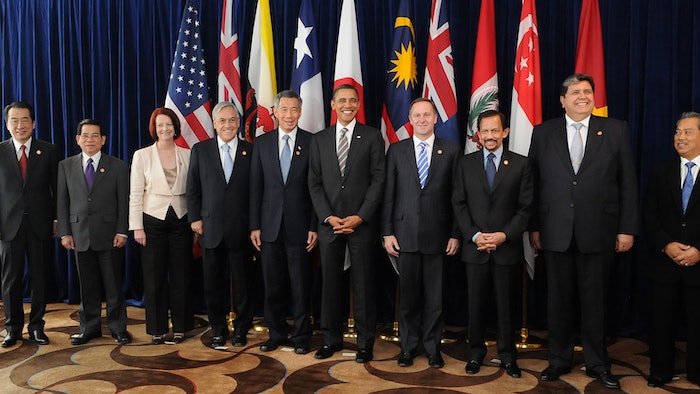 Leaders of nations originally included in the Trans-Pacific Partnership.
Wikimedia

Mexico isn't throwing in the towel on free trade despite Donald Trump's threats to break up NAFTA and abandon other multilateral trade deals.

Mexican Finance Minister Idelfonso Fajardo said Friday that he met with officials from five other signatories to the Trans-Pacific Partnership — Australia, Malaysia, New Zealand, Japan and Singapore — on the sidelines of the APEC summit in Lima, Peru. He says they agreed to forge ahead with the agreement regardless of what the new U.S. administration decides.

It's unclear if they'll succeed. Under terms of the TPP agreement signed this year in New Zealand, the vast free trade agreement can only be implemented if it is ratified by at least six countries that account for 85 percent of the combined gross domestic production of the 12 TPP nations.

What is the TPP and Can the U.S. Get Back In?