They are genetically engineered to resist the pathogen that caused the Irish potato famine. 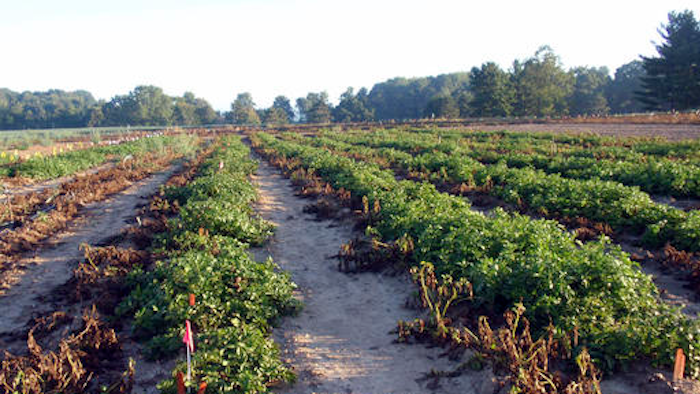 The U.S. Department of Agriculture announced Friday, Oct. 28, 2016, that it has approved commercial planting of two types of potatoes that are genetically engineered to resist the pathogen that caused the Irish potato famine.
Nicolas Champouret/J.R. Simplot Company via AP

BOISE, Idaho (AP) — The U.S. Department of Agriculture has approved commercial planting of two types of potatoes that are genetically engineered to resist the pathogen that caused the Irish potato famine.

The company says the potatoes will also have reduced bruising and black spots, enhanced storage capacity, and a reduced amount of a chemical created when potatoes are cooked at high temperatures that's a potential carcinogen.

"We obviously are very proud of these," said company spokesman Doug Cole.

The potatoes next must clear a voluntary review process through the Food and Drug Administration as well as get the OK from the U.S. Environmental Protection Agency.

The company says it expects those approvals in January with the potatoes entering the market next spring.

The two varieties join a third variety with the same traits called the Russet Burbank that has already attained approval from the Agriculture Department and FDA, with EPA approval also expected in January.

The company said the potatoes contain only potato genes, and that the resistance to late blight, the disease that caused the Irish potato famine, comes from an Argentinian variety of potato that naturally produced a defense.

Late blight continues to be a major problem for potato growers around the world, especially in wetter regions. Company officials say the new types of potatoes will bring 24-hour protections to farmers' fields and reduce the use of pesticide spray up to 45 percent.

The reduction in bruising, Cole said, could reduce waste and increase by 15 percent the top-quality potatoes coming out of fields, which sell for more than bruised potatoes.

Cole said the new varieties of potatoes can be kept in cold storage longer. Conventional potatoes can turn a dark color when cooked after they were kept cold for too long. The enhanced cold storage could have significant ramifications for the potato chip industry by reducing trucking costs, Cole said.

The company's second generation of Innate potatoes follows the first generation that has been selling to consumers for more than a year. Those potatoes, marketed under the White Russet label, have reduced bruising and reduced potential carcinogens when cooked, but not resistance to late blight or enhanced cold storage.

There is no evidence that genetically modified organisms, known as GMOs, are unsafe to eat, but for some people, altering the genetic code of foods presents an ethical issue. McDonald's has rejected using Simplot's first generation of Innate potatoes for its French fries.

The food industry has also faced pressure from retailers as consumer awareness of genetically modified foods has increased. Retailer Whole Foods has said it plans to label GMO products in all its U.S. and Canadian stores by 2018. A company spokeswoman declined to comment over the phone on Monday, and the company didn't immediately respond to an emailed question from The Associated Press about whether it would consider selling the potatoes in its stores.

Simplot has been fighting back with a public relations campaign this year and two female athletes.