The United States will continue to argue that countries cannot simply rely on low interest rates engineered by their central banks to get out of the current global slowdown. 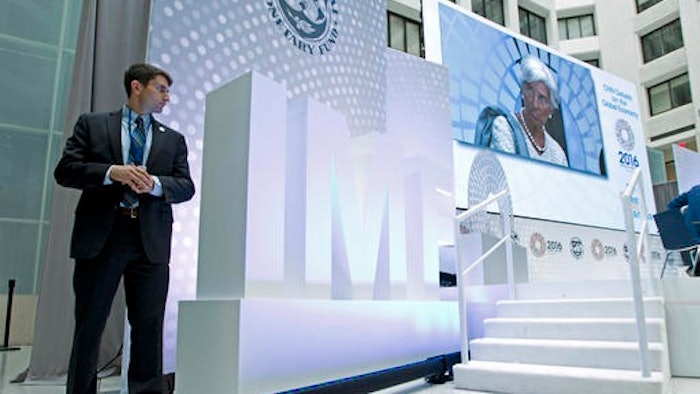 WASHINGTON (AP) — World finance leaders are acknowledging they must do more to deal with a growing anti-trade backlash, which they fear could worsen already sluggish global growth prospects.

How to deal with the attacks on globalization, which have featured in the U.S. presidential campaign of Donald Trump and in the June vote in Britain to leave the European Union, is a top agenda item at the fall meetings of the 189-nation International Monetary Fund and its sister lending institution, the World Bank.

IMF Managing Director Christine Lagarde told reporters at a news conference Thursday that IMF officials "see growth as too low for too long and benefiting too few." She said finance leaders need to pursue policies to boost anemic growth rates and make sure that economic benefits are more widely shared.

Lagarde refused to specifically address the attacks of Trump, who contends that Washington policymakers have failed to reach good trade deals and are letting China, Mexico and other countries pursue unfair trade practices that have cost millions of American jobs and resulted in stagnant wage growth. Trump has also vowed to crack down on illegal immigration.

In Britain, the June 23 vote to leave the EU was also seen as a backlash against globalization and rising levels of immigration in Europe.

Lagarde said now was not the time to abandon efforts to increase trade flows, which she said have helped lift millions of people out of poverty, but she said policy changes were needed.

"It cannot be that push for trade as we have seen it historically," Lagarde told reporters. Rather, she said, there needed to be an emphasis on "inclusiveness, the determination to make it work for all, to pay attention to those at risk of being left out."

World Bank President Jim Yong Kim said there are now more developing nations in recession than at any time since 2009 at the depths of the Great Recession. He blamed the rising weakness on falling commodity prices and a slowdown in trade flows. Kim said finance officials need to expand efforts to attack inequality.

"We have to make growth more equitable and more sustainable," Kim told reporters at his opening news conference Thursday.

In an updated economic outlook prepared for these meetings, the IMF said global trade in goods and services will grow just 2.3 percent this year, the worst showing since a 10.5 percent fall in trade during the depths of the Great Recession in 2009.

The IMF's updated economic outlook downgraded its estimate for U.S. economic growth in 2016 to 1.6 percent, from the 2.2 percent it had predicted in July, reflecting the extremely weak start to the year. The U.S. economy grew 2.6 percent in 2015.

The IMF is projecting overall global growth this year at a lackluster 3.1 percent.

Finance officials of the world's 20 richest industrial countries were meeting Thursday in advance of sessions with the policy-setting bodies of both the IMF and the World Bank. The meetings were wrapping up Saturday. Treasury Secretary Jacob Lew and Federal Reserve Chair Janet Yellen were representing United States at the talks.

Lew said Thursday that the United States would continue to argue that countries cannot simply rely on low interest rates engineered by their central banks to get out of the current global slowdown. He said governments should also be pursuing structural reforms and increased spending in such areas as infrastructure.

"We need to use all the policies that we have," Lew said during an appearance at the Peterson Institute for International Economics. "We can't just rely on monetary policy."

Lew said he believed support was building around the world for greater use of government spending to help the recovery effort.

"I don't want to over-dramatize it, but it is (moving ) in the right direction," Lew said. He also said the Obama administration will keep trying to build the case for congressional approval of the 12-country Trans-Pacific Partnership trade deal even though both Trump and Democratic presidential nominee Hillary Clinton have come out against the pact.

"I think the case for TPP is very strong," Lew said. The administration hopes to win approval in a lame-duck session of Congress after the November elections.