The September hiring figures could keep the Federal Reserve on track to raise the short-term interest rate it controls by December. 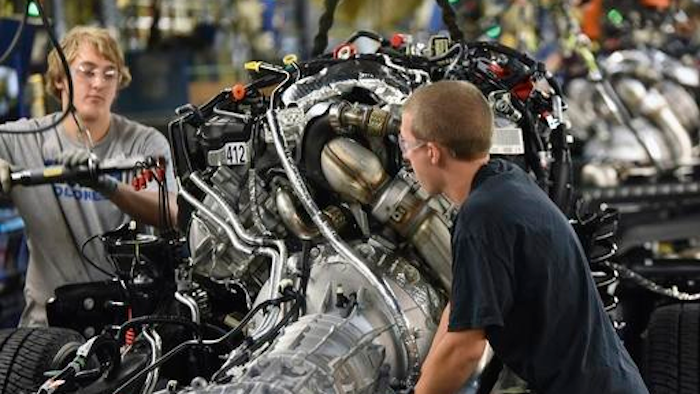 WASHINGTON (AP) — U.S. employers added 156,000 jobs in September, a decent gain that reflects a steady economy but also a sign that hiring has slowed from its robust pace last year.

The unemployment rate ticked up to 5 percent from 4.9 percent, the Labor Department said Friday, but mostly for a positive reason: More people felt confident enough to start looking for work, though not all of them found jobs. As a result, more Americans were counted as unemployed.

Job growth has averaged 178,000 a month so far this year, down from last year's pace of 229,000. Still, hiring at this year's level is enough to lower the unemployment rate over time. Economists have expected the pace of job growth to slow as the supply of unemployed workers declines.

The September hiring figures could keep the Federal Reserve on track to raise the short-term interest rate it controls by December. After seven years of pinning that rate at a record low near zero to try to spur more borrowing and spending, the Fed raised its rate modestly in December. It has not acted since.

"The September payroll report was a decent report that shows moderate job growth continues," Scott Anderson, chief economist at Bank of the West, wrote in a note. "In many ways, it was a 'Goldilocks' number — not too hot or not too cold — for the market and the Fed."

Friday's report also comes a month before voters will decide a presidential election in which the two major nominees have sketched out wildly conflicting views of the economy's health and what should be done to stimulate its growth.

In September, average hourly pay rose 6 cents to $25.79 and is now up 2.6 percent from a year ago. That's better than the gains for most of the seven-year economic recovery, during which pay has increased at a tepid pace of about 2 percent a year. The pay increases, modest as they are, suggest that many employers are being forced to pay more to attract workers.

Yet wage gains are still lagging behind the roughly 3.5 percent pace that has long been consistent with a healthy economy.

Nearly all the net job gains last month occurred in the services industries, including such higher-paying services as management and technical consulting, accountants and computer networking.

Manufacturers shed jobs for a second month in a row, cutting 13,000. Manufacturers have struggled for the past 18 months as businesses have reduced their spending on machinery and other equipment. Donald Trump, the Republican presidential nominee, has focused his economic proposals on restoring manufacturing jobs.

Last month, construction added 23,000 positions and retail 22,000. Employers added 15,000 jobs in a category that includes restaurants, hotels and casinos, its slowest gain since May. Hiring also slowed in the education and health sectors.

Recent data suggest that the economy is picking up after a weak start to the year, though growth is unlikely to accelerate very much.

Consumer spending was flat in August, the weakest showing in five months. And factories have struggled as businesses have put off investing in new machinery, computers and other equipment.

Still, a recent private survey found that manufacturing expanded in September after shrinking in August. Orders for factory goods jumped, suggesting that output may rise further.

Consumers also appear increasingly confident about the economy, which could stimulate a rebound in spending. Consumer confidence reached a nine-year high last month.

Retailers are expecting robust spending for the holiday shopping season. The National Retail Federation projects that holiday spending will rise 3.6 percent this year from last year. That's better than last year's gain and slightly above the 3.4 percent average since the Great Recession officially ended in 2009.

The economy expanded at just a tepid 1.1 percent annual pace in the first six months of the year. Still, economists have forecast that growth accelerated to a 2.5 percent to 3 percent annualized pace in the July-September quarter.

The slower growth hasn't led employers to cut back on staffing. Applications for unemployment benefits, a proxy for layoffs, fell on average last month to a 43-year low.