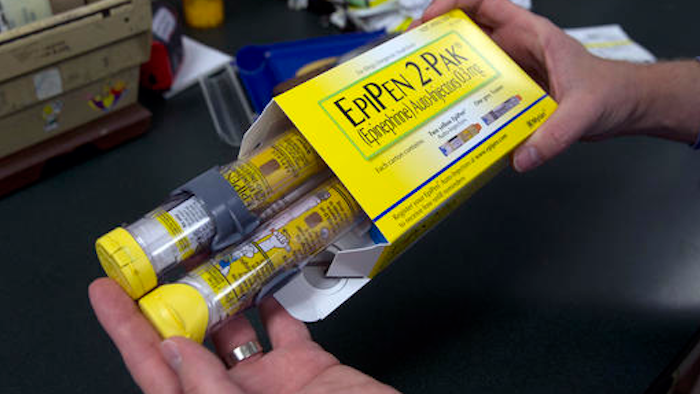 In this July 8, 2016 file photo, a package of EpiPens, an epinephrine autoinjector for the treatment of allergic reactions is displayed in Sacramento, Calif. Lawmakers are demanding more information on why the price for live-saving EpiPens has skyrocketed. EpiPens are used largely by children to ward off potentially fatal allergic reactions, and its price has surged in recent years. A two-dose package cost less than $60 nine years ago. The cost is now closer to $400.
AP Photo/Rich Pedroncelli, File

WASHINGTON (AP) — Lawmakers are demanding more information on why the price for lifesaving EpiPens has skyrocketed.

EpiPens are used to ward off potentially fatal allergic reactions, and the price has surged in recent years. A two-dose package cost less than $60 nine years ago. The cost is now closer to $400.

Sen. Charles Grassley, R-Iowa, wrote Mylan, the company that manufactures the devices, and asked for more information on why the prices have increased. He cited the cost to parents whose children need them and also to schools that keep the EpiPens on hand. He noted the costs can also be passed on to taxpayers when children are covered by Medicaid or other government programs.

Rep. Grace Meng, D-N.Y., on Tuesday asked the House Oversight and Government Reform Committee to hold a hearing on the issue. She is a co-chair of the Congressional Kids Safety Caucus.

"Thousands of Americans rely on EpiPens in a given year, and perhaps no time is more important in the purchasing of these devices than the beginning of a new school year," Meng wrote in a letter to committee chairman Jason Chaffetz, R-Utah, and top Democrat Elijah Cummings of Maryland.

A two-dose package has been selling for more than $365 recently, according to data from Elsevier Clinical Solutions' Gold Standard Drug Database.

In a statement issued Monday, Mylan said it has savings programs for patients and is also offering free EpiPens to schools. The company said around half of U.S. schools are participating in that program.