It was the second such scandal to slam the Japanese auto industry in a month after Mitsubishi Motors said it had systematically falsified mileage on several models to inflate them. 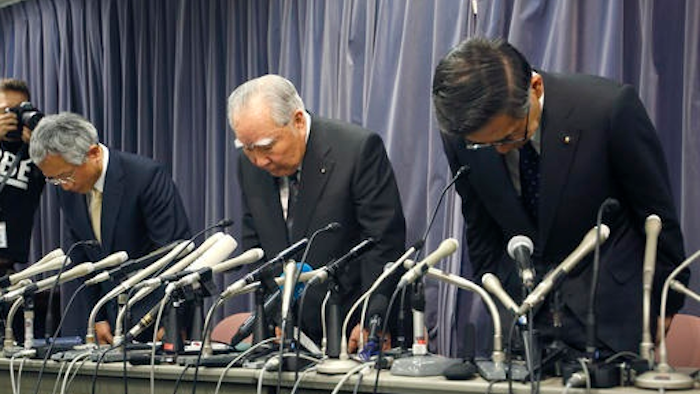 It was the second such scandal to slam the Japanese auto industry in a month after Mitsubishi Motors said it had systematically falsified mileage on several models to inflate them.

Suzuki Motor Corp. shares fell in Tokyo trading Wednesday on Japanese media reports the company might have cheated on mileage, but recovered to close down 9 percent.

Earlier this month, Nissan Motor Co. said it will buy a 34 percent stake in Mitsubishi for 237 billion yen ($2.2 billion). Nissan Chief Carlos Ghosn called that a deal because Mitsubishi stock had plunged more than 40 percent after the scandal broke.

Mitsubishi President Testuro Aikawa said Wednesday that he will step down to take responsibility for the mileage cheating scandal, although he will stay on to see through to the end of the investigation. Aikawa has denied any personal involvement in the scandal.

Suzuki, whose lineup focuses on minicars, or models with small engines that make them eligible for tax breaks in Japan, said the dubious tests did not affect models sold abroad.

Suzuki Chairman Osamu Suzuki appeared before reporters at the transport ministry and bowed to apologize. The government instructed all automakers to check on mileage tests after the Mitsubishi scandal surfaced.