The three companies said they certified products that tested unsuccessfully. 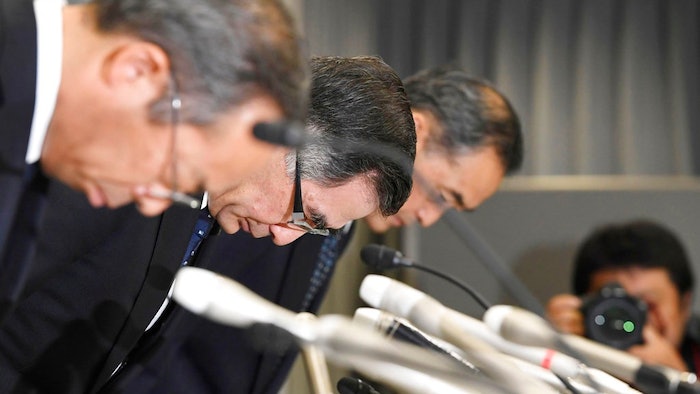 The three companies said they certified products that tested unsuccessfully. Suzuki said nearly half of its 12,819 new car inspections involved improper inspections at its three plants. Improper inspections happened less often at the other two — 2.1 percent of 335 motorbikes inspected in the last two years at Yamaha and 3.8 percent of 1,875 vehicles inspected at Mazda over the past four years, the ministry said in a statement.

Results at Japanese affiliates of three foreign automakers — Audi AG, Volkswagen AG and Volvo Cars — were pending, while no irregularities were reported by the remaining 17 companies, the ministry said.

"Mishandlings found in so many vehicles were a serious problem, and we take it very seriously," Suzuki Motor president Toshihiro Suzuki told a news conference, and apologized to the company's customers and business partners for causing trouble. He said managers familiar with inspections were not staffed at the factories where discipline was lacking.

The auto industry is part of the broader product inspections scandal in Japan since last year. Japanese prosecutors charged major steelmaker Kobe Steel for falsifying wide range of products for years, affecting hundreds of companies from aluminum castings to cooper tubes for autos, aircraft, appliances and trains. The steel product scandal has set off a class-action lawsuit and an investigation in the U.S.