Most of Canada's Oil Sands Production Shut Down by Wildfire

Suncor chief executive Steve Williams, the head of Canada's largest oil company, said about a million barrels a day went offline but said some of that has already started to come back. 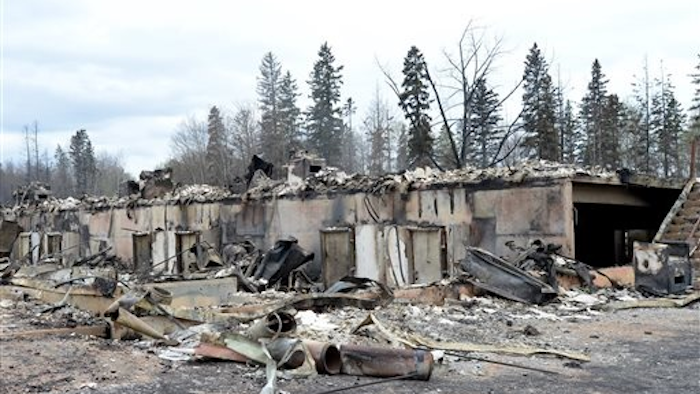 A break in the weather has officials optimistic they have reached a turning point on getting a handle on the massive wildfire.
Jonathan Hayward/The Canadian Press via AP

EDMONTON, Alberta (AP) — The majority of Canada's oil sands industry has stopped production and will only start back up when it is "absolutely safe" but that should happen soon, Alberta's premier said Tuesday after meeting with company officials to discuss the impact of the massive wildfire that destroyed more than 10 percent of the homes and buildings in Canada's main oil sands city.

Suncor chief executive Steve Williams, the head of Canada's largest oil company, said about a million barrels a day went offline but said some of that has already started to come back. Alberta Premier Rachel Notley said the massive oil sands mines north of Fort McMurray have not been damaged.

Shell Canada said it had resumed production at its Albian Sands mining operations but at a reduced rate after a seven-day closure.

The wildfire that broke out a week ago has forced as much as a third of Canada's oil output offline and was expected to impact an economy already hurt by the fall in oil prices. Alberta's oil sands have the third-largest reserves of oil in the world behind Saudi Arabia and Venezuela. Its workers largely live in Fort McMurray, a former frontier outpost-turned-city whose residents come from all over Canada.

Notley said getting pipelines and electricity operational are priorities. She said getting production back online will be a matter of "days and short weeks."

"The majority of production has stopped, certainly not all of it, but the majority. If that were to continue for a month or two you would start to see measurable outcomes to our GDP," Notley said.

Notley said the halted production affects the livelihood of thousands of Canadians, with both companies and the government losing revenue. She said the main highway into Fort McMurray and to the mines to the north has been reopened for oil workers but they are not allowed to visit the city.

A plan is being put together within two weeks so most of the 88,000 evacuees can return to their homes. The fire continues to grow outside the city in Alberta's vast boreal forest after merging with another one and now is about 884 square miles (2,090 square kilometers) in size. That includes areas already burned and currently burning.

The bulk of the city's evacuees moved south after a mandatory evacuation order, but 25,000 went north and were housed in camps normally used for oil sands workers until they also could be evacuated south. Notley thanked the industry for helping the evacuees. Most are now staying with family and friends or have returned to homes elsewhere in Canada, including many who have homes on Canada's Atlantic coast where there are fewer jobs.

"We will get back to normal as quickly as possible," Notley said.

Williams said getting production back up will depend on each company and facility.

"The shortest ones will be 24 to 48 hours before they are operating. Some will be more difficult and will be a week or two. The most difficult are the ones we haven't been to yet which will be down south of Fort McMurray where the fire actually went across the plants," Williams said.

Williams said the sites are not normally affected by this type of fire but companies have to check. Notley said it appears there may have been some damage to the Nexen Long Lake facility, south of Fort McMurray, which is owned by China's CNOOC Ltd., but it is unclear how much.

No deaths or injuries have been reported from the fire itself, but two people died in a traffic accident during the evacuation.

Notley got her first direct look at the devastation on Monday after cold temperatures and light rain had stabilized the massive wildfire to a point where officials could begin planning how to allow residents to return. The break in the weather left officials optimistic they've reached a turning point in getting a handle on the massive wildfire.