UPDATE: This article has been updated with a statement from Hayes Mechanical

On April 2, 2019, a worker at Homer City Generating Station was severely injured when his arm became stuck in a 13,000-pound coal-crushing roller. The facility is a coal-powered generating plant in Homer City, Pennsylvania.

According to the plant’s business operations manager, Holly Grego, a team of first responders employed by the plant helped with the rescue. According to a local report, the crew is hired for these specific types of emergency scenarios.

The industrial accident happened in the morning, and the generating station's team was the first on the scene to provide assistance. The call went out to local emergency personnel around 9:00 am.

The worker suffered severe crush injuries from the machine and he was flown to an area trauma center. According to the paramedics, he is alive because his co-workers took swift action.

The man was a subcontractor at the plant employed by Hayes Mechanical, which offers services such as boilermaking, millright, pipefitting, sheet metal fabrication, plumbing and electrical contracting.

According to safetymanualosha.com, workers suffer about 125,000 caught or crushed injuries every year.

In a Facebook post, the Coral-Graceton Volunteer Fire Company says, “The efforts of the Homer City Generating Station Emergency Response Team are to be commended. They went above and beyond the call of duty to aid in the rescue of a coworker. Without the efforts of these men, the rescue would not have been completed in such a timely manner.”

In a statement to IEN, an NRG spokesman said, "NRG's focus is always Safety First. We appreciate the efforts of the on-station Emergency Response Team as well as the local emergency responders that allowed us to take care of the individual onsite and get him to the nearest medical facility where he could be properly cared for. Teams from NRG and the individual's employer, Hayes Mechanical, have reviewed the situation and taken steps to ensure this type of accident does not happen again."

The plant remained operational throughout the incident. 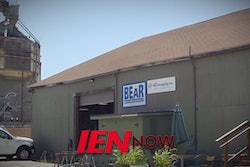