Workers face a lack of fire exits and doors, sexual harassment, low wages, and conditions so hot that workers are fainting.

The collapse of a garment factory in Bangladesh’s Rana Plaza in 2013 was one of the deadliest incidents in manufacturing history – with more than 1,100 workers losing their lives due to a structural flaw in the building where workers toiled long hours under allegedly harsh conditions to create clothing for American and European retailers.

Post-collapse, brands like H&M, Walmart and Gap were among the most powerful companies that pledged to improve the safety of some of the country’s poorest workers.

But new reports released last week by the Asia Floor Wage Alliance, a coalition of trade unions and other research and advocacy groups, says that these pledges are falling short in significant ways.

The report details everything from a lack of fire exits and doors to sexual harassment, low wages, and conditions so hot that workers are suffering from fainting spells.

The retail brands, according to the New York Times, say they’ve aggressively pushed stronger labor protections and vastly increased their monitoring of the factories that make their products. But even they admit that progress is slow.

And the discussion raises questions, experts say, about the cost cutting required to sell the $5 T-shirts that satisfy the Western world’s appetite for ‘fast fashion.’

Many of these factories are compromising workforce safety to keep costs low enough to beat out the competition for business from other foreign countries.

So can companies like H&M, Gap and Walmart make enough progress in time? According to Anannya Bhattacharjee, the international coordinator for the Asia Floor Wage Alliance, “At this point, we do not see H&M working in a way that would prevent another Rana Plaza.” 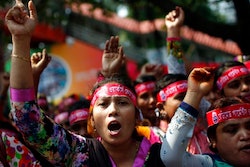