The fire erupted late Tuesday night after an explosion in a cooling tower. 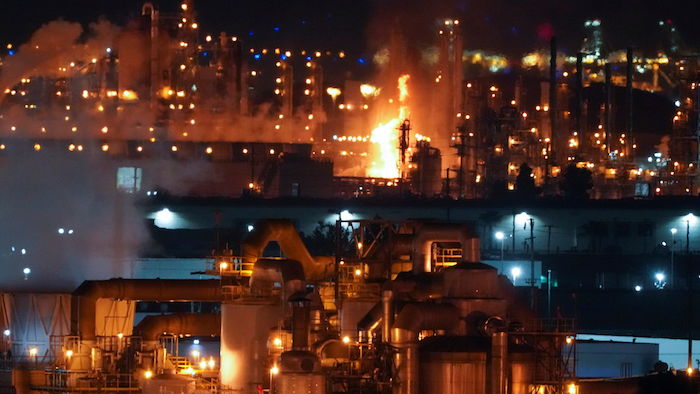 A fire burns after an explosion at the Marathon Refinery in Carson on Tuesday, Feb. 25, 2020.
Scott Varley/The Orange County Register via AP

CARSON, Calif. (AP) — The cause of an explosion and fire at the largest oil refinery on the West Coast was under investigation Wednesday as air quality authorities conducted laboratory testing to determine whether toxic gases were released.

No one was injured and there were no immediate indications that any toxins affected the community around the Marathon Petroleum refinery in Carson, just outside Los Angeles, authorities said.

It was not immediately clear whether the fire would push gasoline retail prices higher, as has happened after previous fires or unplanned shutdowns at California refineries.

The fire erupted late Tuesday night after an explosion in a cooling tower, according to the Los Angeles County Fire Department, which assisted the refinery's own firefighters.

“Air monitoring is ongoing, and no risk to the community has been identified,” Marathon said in a statement.

In addition, initial measurements showed levels of particulate matter were within the typical range for the area.

Nonetheless, inspectors from the agency collected air samples that were being tested for toxic substances such as benzene, tetrachloroethylene, toluene and styrene, the air quality district said.

Marathon's Carson refinery is the largest on the West Coast with a crude oil capacity of 363,000 barrels daily, according to the company’s website. It manufactures gasoline, diesel fuel, propane and other materials.

Marathon said a portion of the refinery was shut down in response to the fire, but it gave no details.

The fire caused an immediate price spike on the gasoline trading market but that was quickly cut in half and the ultimate impact on pump prices was uncertain, an analyst said.

“It’s still possibly a little too early to tell what the impacts are going to be at the pump," said Denton Cinquegrana, chief oil analyst at Oil Price Information Service, which monitors the global fuel supply industry.

“It sounds like as spectacular as the fire looked, a lot of the major operations may not have been impacted," he said.

Gasoline prices have been flat in California, where the statewide average was $3.48½, down 4 cents from last month, he said.