US Asks Federal Judge to Toss Out Nevada Plutonium Lawsuit

The state claims that residents are harmed by radiation from the one-half metric ton of plutonium secretly trucked a year ago from South Carolina to Nevada. 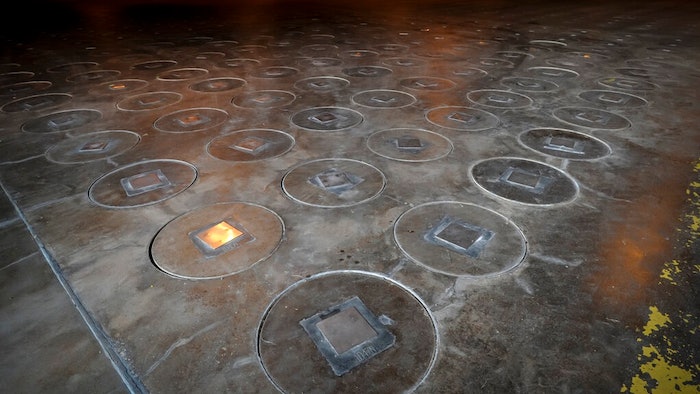 In this Nov., 20, 2013, file photo, radioactive waste, sealed in large stainless steel canisters, are stored under five-feet of concrete in a storage building at the Savannah River Site near Aiken, S.C. The federal government is arguing that it has already promised no more weapons-grade plutonium will be sent to Nevada, and the state lacks standing to seek a court order to force the Energy Department to remove it. Documents filed late Friday, Nov. 15, 2019 in U.S. District Court in Reno brand as "conjectural" or "hypothetical" state complaints that residents are harmed by radiation from material secretly trucked a year ago from South Carolina to Nevada.
AP Photo/Stephen B. Morton, File

LAS VEGAS (AP) — The federal government wants a judge to reject Nevada’s request for a court order to remove weapons-grade plutonium from a site north of Las Vegas, arguing that officials have already promised that no more will be shipped to the state.

In documents filed Friday in U.S. District Court in Reno, the federal government brands as “conjectural” or “hypothetical” state claims that residents are harmed by radiation from the one-half metric ton of plutonium secretly trucked a year ago from South Carolina to Nevada.

The Department of Energy “routinely and safely transports nuclear materials into and out of Nevada and stores classified amounts of plutonium in Nevada,” it added.

State Attorney General Aaron Ford is pressing for the court order, saying the state was not informed of the shipments until they had already been made and can’t trust the federal agency to abide by after-the-fact promises.

“While we appreciate the Department of Energy’s new position that it will not ship additional plutonium here, a court order to this effect will hold the department accountable,” Ford said Monday in a statement.

The state maintains the Energy Department failed to conduct proper environmental reviews, and that an accident transporting, handling or storing the highly radioactive material could permanently harm Las Vegas — home to 2.2 million people and host to more than 40 million tourists a year.

“The long-term storage of this plutonium has exposed — and will continue to expose — Nevada’s property, lands, water, air and citizens to greater radiological pollution and increased risk of ecological and economic catastrophe,” state attorneys said in documents filed Oct. 23.

The Energy Department disclosed last January that the plutonium had been taken in late 2018 to a specialized facility at the vast Nevada National Security Site, an area larger than the state of Rhode Island. The site was used to conduct nuclear weapons tests from 1945 to 1992.

The U.S. government had been ordered by a federal judge in South Carolina to remove a metric ton (2,204 pounds) of plutonium from the Savannah River nuclear weapons refining complex by 2020, and to remove another 5 metric tons (11,020 pounds) in future years.

The Energy Department says it plans to eventually move the plutonium to the Waste Isolation Pilot Plant in New Mexico. Outgoing Energy Secretary Rick Perry in April promised to send no more plutonium to Nevada and to remove the amount already delivered by 2027.

No Ruling on Plutonium Shipments