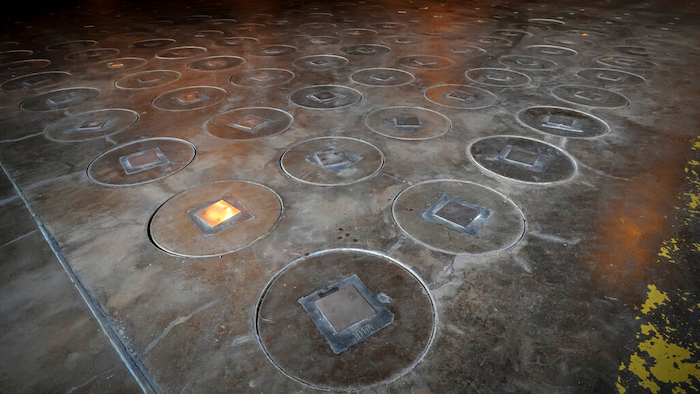 In this Nov. 20, 2013 file photo, radioactive waste, sealed in large stainless steel canisters, is stored under five feet of concrete in a storage building at the Savannah River Site near Aiken, S.C. U.S. Energy Secretary Rick Perry is pledging to expedite the removal of weapons-grade plutonium his agency secretly shipped to Nevada last year, beginning in 2021. Perry said in an April 24, 2019 letter to Nevada Sen. Catherine Cortez Masto, made public on Tuesday, April 30, that DOE intends to complete the removal of one-half metric ton (1,102 pounds) of the highly radioactive material from Nevada by the end of 2026.
AP Photo/Stephen B. Morton, File

RENO, Nev. (AP) — U.S. Energy Secretary Rick Perry is pledging to expedite the removal of weapons-grade plutonium secretly hauled to Nevada last year as the state and Trump administration remain locked in a court battle about whether the shipment was legal.

The Energy Department intends to start removing the highly radioactive material in 2021 and finish by the end of 2026, Perry said in an April 24 letter to U.S. Sen. Catherine Cortez Masto, a Nevada Democrat.

He also assured her in the letter released Tuesday that his department won't ship any more plutonium from South Carolina to the Nevada Nuclear Security Site north of Las Vegas.

As a result, Cortez Masto said she would drop all Senate holds she had placed on pending nominations to fill vacancies in the Energy Department.

The agency already said in court filings earlier this year that it wouldn't ship any more plutonium from South Carolina to Nevada, but the senator said she wanted Perry's assurances in writing.

Nevada still is seeking a formal court order preventing any shipments because it says the agency's track record shows it cannot be trusted. It also has a related case before the 9th U.S. Circuit Court of Appeals.

A federal judge in South Carolina has ordered the U.S. government to remove a metric ton (2,204 pounds) of plutonium from the Savannah River site by Jan. 1, 2020, and haul out an additional 5 metric tons (11,020 pounds) in future years.

Nevada sued in November, accusing the Energy Department of failing to do the necessary environmental reviews before adopting a plan last August to ship the plutonium to the state.

The department disclosed in January that it already had shipped half a metric ton (1,102 pounds) of the material before Nevada sued but kept it secret for national security reasons.

It says critics in Nevada have incorrectly categorized the material as the kind of nuclear waste that the Trump administration wants to store at nearby Yucca Mountain.

A U.S. Senate panel planned a hearing Wednesday on proposals to restart the licensing process for Yucca Mountain, which was formally suspended under the Obama administration.

"The one-half metric ton of weapons-grade plutonium that was shipped from South Carolina to Nevada before November 2018 is not nuclear waste; it is material essential for the maintenance of the U.S. weapons stockpile," Perry wrote in the April 24 letter to Cortez Masto.

But he acknowledged concerns from the Nevada congressional delegation and vowed to remove the plutonium and not ship the other half-ton of material from South Carolina.

"Nevadans didn't create this waste and we shouldn't be on the hook for storing it in our state against our will," Cortez Masto said in a statement Tuesday.

She thanked Perry for working with her on the issue but said the state "will have additional fights ahead."

The Energy Department has said it plans to forward the plutonium to the Waste Isolation Pilot Plant in New Mexico by the "2026-2027 timeframe."