The opening between the pipe and the bottom of the Straits of Mackinac poses "no safety or integrity risk," an assessment that state regulators haven't confirmed. 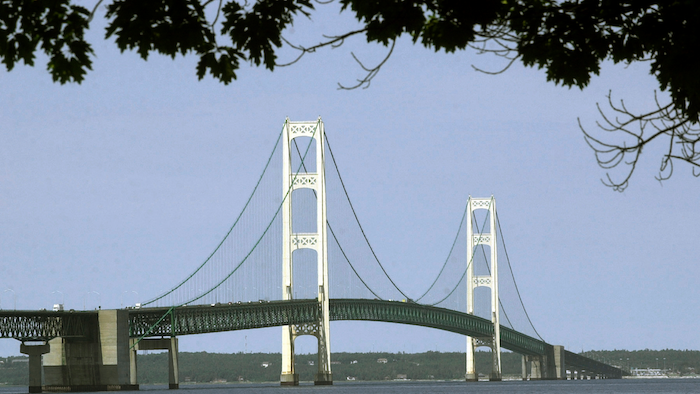 TRAVERSE CITY, Mich. (AP) — Erosion has created a gap beneath an oil pipeline in a key Great Lakes channel that's wider than allowed under an agreement with the state of Michigan, oil transport company Enbridge Inc. said Wednesday.

The Canadian company said the opening between the pipe and the bottom of the Straits of Mackinac poses "no safety or integrity risk," an assessment that state regulators said they couldn't immediately confirm. But the Michigan attorney general's office said the development reinforces the need to decommission Enbridge's Line 5, which carries 23 million gallons of oil and natural gas liquids daily between Superior, Wisconsin, and Sarnia, Ontario.

A segment more than 4 miles long divides into two pipes when crossing the straits, which connect Lakes Huron and Michigan. An easement granted by the state when the pipes were laid in 1953 requires that gaps beneath them not exceed 75 feet in width. Enbridge reported to state agencies Wednesday that one such opening had reached 81 feet.

The company said it had applied 16 months ago to install screw anchors that would provide additional support and had obtained a permit from the state but was awaiting one from the U.S. Army Corps of Engineers. "We're kind of on hold until we get that," spokesman Ryan Duffy said. "We have a crew at the straits ready to go. They have the screw anchors and as soon as they get the permit, they can install one in the place that's been an issue in two days."

Lynn Rose, spokeswoman for the Army Corps district office in Detroit, said the agency sent Enbridge a letter in July relaying concerns about the proposal that had been raised during a public comment period. Rose said the Corps was waiting for Enbridge to respond, although Duffy said the company had already done so.

Environmental groups contend the aging pipeline is increasingly likely to leak and devastate hundreds of miles of Great Lakes waters and shorelines. The company says repeated tests and inspections have shown it's in good shape.

Enbridge reached an agreement with former Governor Rick Snyder's administration last year to replace the underwater segment with a new pipe that would be enclosed in a tunnel drilled through bedrock beneath the lake bed.

Governor Gretchen Whitmer, who succeeded Snyder in January, demanded a faster timeline for the $500 million tunnel project than Enbridge said was possible. After they failed to reach a deal, Attorney General Dana Nessel filed a lawsuit in June to shut down the pipeline.

Enbridge has installed 147 supports in recent years to stabilize the pipes as the straits' swirling currents have washed sediments from beneath them. The Michigan Department of Environment, Great Lakes and Energy approved Enbridge's latest request to add 54 anchors, including one at the location of the 81-foot gap, early this year.

Duffy said engineers previously have concluded the pipeline could withstand gaps twice as wide as the 75-foot limit, which he described as "conservative." The state environmental department has yet to determine whether that's correct, spokeswoman Jill Greenberg said. But Kelly Rossman-McKinney, spokeswoman for Nessel, said the erosion makes the pipeline "increasingly vulnerable to anchor strokes and potential ruptures."

The National Wildlife Federation urged Whitmer to revoke Enbridge's easement and shut down Line 5. "How many more violations, near misses and warning signs do we need before our leaders fully protect the Great Lakes?" spokeswoman Beth Wallace said.