Massive blasts continued for about 16 hours and forced over 16,500 people to flee their homes. 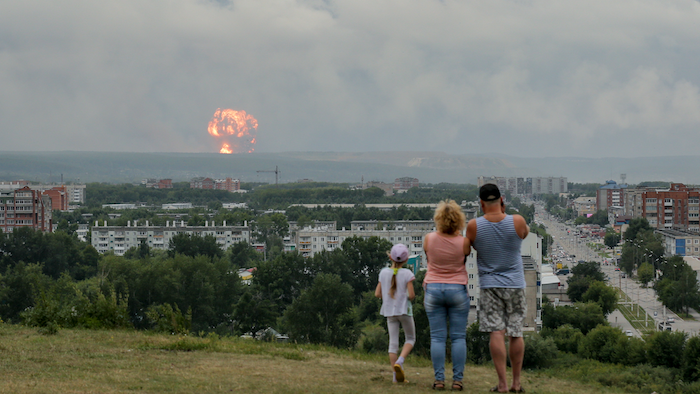 In this photo taken on Monday, August 5, 2019, a family watches explosions at a military ammunition depot near the city of Achinsk in eastern Siberia's Krasnoyarsk region.
AP Photo/Dmitry Dub

MOSCOW (AP) — Russian authorities say powerful explosions that started at a military depot in Siberia two days ago left one person dead and 13 people injured. A fire erupted Monday at an ammunition depot near the city of Achinsk in eastern Siberia's Krasnoyarsk region, triggering massive blasts that continued for about 16 hours and forced over 16,500 people to flee their homes.

The evacuees began returning to their homes Wednesday after military experts checked the residential areas for explosives. Officials have also lifted a ban on air traffic and reopened railways and roads around the depot.

An official probe has been launched to determine the cause of the fire, the latest in a series of blazes at Russian military arsenals over the past few years.