A suspension part can come loose from the frame due to corrosion. 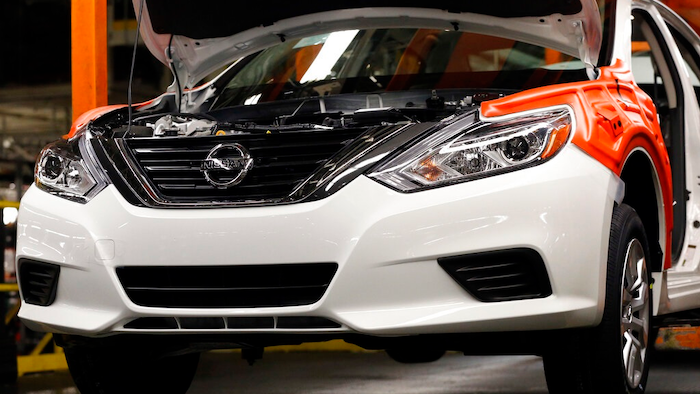 In this April 6, 2016, file photo, a new 2016 Altima awaits additional engine work on the assembly line at the Nissan Canton Vehicle Assembly Plant in Canton, Miss. Nissan will do a “service campaign” to fix nearly 200,000 Altima midsize cars because a suspension part can come loose from the frame due to corrosion.
AP Photo/Rogelio V. Solis, File

DETROIT (AP) — Nissan will do a "service campaign" to fix nearly 200,000 Altima midsize cars because a suspension part can come loose from the frame due to corrosion.

The campaign falls short of a recall, but the U.S. National Highway Traffic Safety Administration is continuing an investigation into the problem that covers more than 2 million cars.

Owners will be notified in the fall to bring their vehicles in to have a rear lower control arm replaced.

The service campaign could let Nissan avoid a recall, which would get it out of NHTSA monitoring and requirements to report progress to the government.

The company says in a statement that the corrosion issue hasn't been seen outside states that use road salt. Based on field inspections, few cars outside the salt states would experience the problem, the statement said.

In documents posted Thursday, NHTSA said 139 owners have complained about the problem to the company and the government. No crashes or injuries have been reported.

NHTSA began investigating last year after getting complaints that the parts could crack and fail. Control arms let the wheels and tires travel up and down over bumps. On Thursday, it expanded the probe to include more than 2 million Altimas from the 2013 through 2018 model years.

The agency says Nissan acknowledges that cracks can develop in the parts and they're made worse by corrosive road salt. The parts were redesigned in January of 2018 to improve durability, NHTSA says.

The agency says that Nissan has determined that the rate of incidents reported is 0.003% of the cars. The company told NHTSA that if the part fails, the vehicles can still be controlled. For those reasons, Nissan "does not believe the subject control arm failure poses an unreasonable risk to motor vehicle safety," the agency wrote.

NHTSA says it will keep collecting data and either it or Nissan will do more comprehensive testing.

Nissan says any owner who feels their car isn't performing right should take it to a dealer.