The company and scientists can't agree on how much oil is still leaking from a hurricane-induced spill in the Gulf of Mexico 14 years ago. 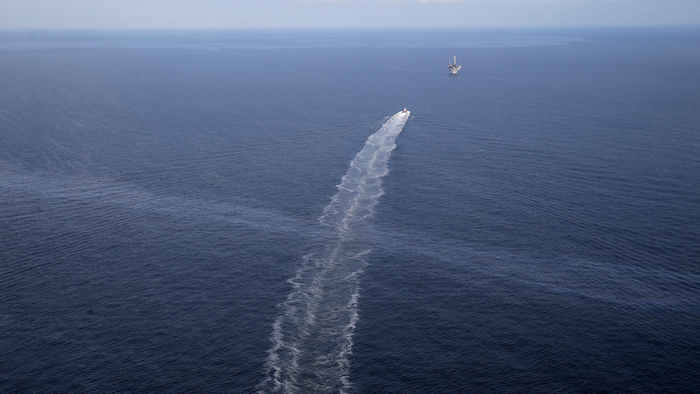 NEW ORLEANS (AP) — A new federally led study of oil seeping from a platform toppled off Louisiana's coast 14½ years ago found releases lower than other recent estimates, but contradicts the well owner's assertions about the amount and source of oil.

Oil and gas have been leaking into the Gulf of Mexico since a subsea mudslide caused by Hurricane Ivan on September 15, 2004, knocked over a Taylor Energy Co. production platform, which dragged and broke a bundle of well pipes. Taylor capped nine wells but said it couldn't cap 16.

The company contends oil sheens on the water's surface indicate there's only a dribble of 2.4 to four gallons of oil and gas a day. Taylor Energy, which is fighting a federal order to stop the seepage, also says any oil rising from the site is from oil-soaked sediment and any gas is produced by living organisms.

"The results of this study contradict these conclusions," said the report paid for by the federal Bureau of Safety and Environmental Enforcement, which oversees offshore drilling, and written by two National Oceanic and Atmospheric Administration scientists and one from Florida State University. Taylor said in an emailed statement that it wants verifiable scientific data about the leak and a scientifically and environmentally sound solution. The company has said remaining pipes are buried under so much oily and treacherous silt that stopping any leaks would do more environmental damage than letting them be.

No coastal environmental damage has been reported from the ongoing seepage, unlike the 2010 Deepwater Horizon oil spill, an outside scientist said. The BP spill oiled at least 400 square miles of sea floor and 1,300 miles of shoreline from Texas to Florida, killing thousands of birds and contributing to dolphin deaths for years.

The study's authors figure that the total released each day from the Taylor site could have been as much as 4,500 gallons a day. They used sonar and a newly developed "bubblometer" to measure oil and gas bubbles rising through the water. These are based on direct measurements, while previous estimates have relied on satellite and remote sensing of the sheen of oil resulting from the seep, Chris Taylor, of NOAA's National Centers for Coastal Ocean Science in Beaufort, North Carolina, said Friday.

The figure is a conservative one, the report said.

Andrew Mason of the NOAA centers' office in Silver Spring, Maryland, said, "These are not final definitive government estimates," noting that they will figure in the government's official estimate after additional study. The researchers said the oil cannot be from sediment because it's only mildly biodegraded. The team's methods look reasonable, said Ed Overton, a professor of environmental studies at Louisiana State University who was not part of the study.

"There are no standard methods for this type of work," because the amounts of oil involved are relatively small, he said. NOAA reported two possible ranges: one using sonar from a boat and an underwater robot; the other using their bubblometer — a box with a video camera to get pictures of the bubbles, topped by a funnel to collect the oil and gas.

The sonar showed releases of 378 to 1,974 gallons a day; the bubblometer data indicated 798 to 4,536 gallons daily. The extent of the pollution has been an issue since environmentalists investigating the 2010 BP oil spill noticed a persistent sheen outside the heavily oiled area.

A 2015 investigation by The Associated Press revealed evidence that the leak was worse than the company or government had publicly reported. Afterward, the Coast Guard provided a new leak estimate about 20 times larger than the company's at the time. The Coast Guard said in mid-May that the recurrent sheen about 11 miles from New Orleans had become "barely visible" since a containment system was installed several weeks earlier.

Court papers said the system had captured more than 30,000 gallons of oil over 30 days. That works out to a daily amount in the middle of the sonar estimate and at the low end of the bubblometer estimate, the new report said.

A federal expert's report in Taylor Energy's lawsuit put the figure at 10,500 to 29,400 gallons a day. That could be interpreted to mean more oil may have leaked there since 2004 than the estimated 130 million gallons from the BP gusher in 2010. But Mason said the new report can't be used to extrapolate the total spilled from the Taylor site.

And Overton of LSU said unlike the Deepwater Horizon, this is a slow, small seep that hasn't oiled wildlife or beaches. "Whatever the volume ... it doesn't mean it piles up so that you've got a Gulf full of oil," he said.