Feds Probe Quality of Repairs on Plane in Hawaii Crash

The same plane sustained substantial damage to its tail section in a 2016 accident while carrying skydivers over Northern California. 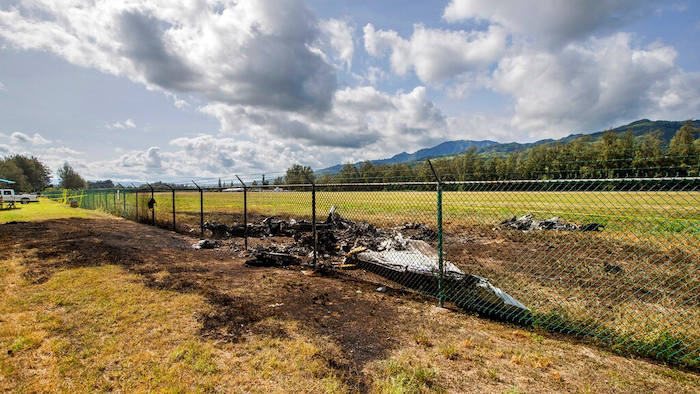 This is the site where a Beechcraft King Air twin-engine plane crashed Friday evening killing multiple people seen on Saturday, June 22, 2019, in Mokuleia, Hawaii. No one aboard survived the skydiving plane crash, which left a small pile of smoky wreckage near the chain link fence surrounding Dillingham Airfield, a one-runway seaside airfield.
Dennis Oda/Honolulu Star-Advertiser via AP

HONOLULU (AP) — Federal investigators will review repair and inspection records on the skydiving plane that became inverted before crashing shortly after takeoff on Oahu's North Shore, killing all 11 people on board in the deadliest civil aviation accident since 2011.

The same plane sustained substantial damage to its tail section in a 2016 accident while carrying skydivers over Northern California.

Repairs were then made to get the plane back into service, National Transportation Safety Board officials said at a news conference Sunday.

The plane was equipped to carry 13 people, she said.

"Weight and balance has a factor in the safety of these operations and that's a calculation that needs to be made before a plane is operated," she said.

In the 2016 incident, the twin-engine plane stalled three times and spun repeatedly before the pilot managed to land it after the skydivers jumped out, the NTSB said in its investigative report. The plane was too heavily weighted toward the back, which was blamed on the pilot.

The plane remains on the field at Dillingham Airfield, and it could stay there for three or four days before being removed to a secure location. The airport remains closed.

The NSTB will issue a preliminary report in about two weeks. The final report, which will include the cause of the accident, could take up to two years, but Homendy said the NTSB has at times issued urgent safety recommendations before the final report, if warranted.

Friday's crash was the most deadly civil aviation accident in the United States since a 2011 Reno Air Show wreck killed a pilot and 10 spectators in Nevada.

Officials have not named the victims in Friday's North Shore crash. An official with the mayor's office said Monday would be the earliest any information is released.

However, at least one family is sharing their grief before getting the official word, saying Casey Williamson, 29, was one of the victims.

Williamson's love of adventure led him to winter snowboarding in Vail, Colorado, and summer skydiving in Moab, Utah. A year-and-a-half ago, he found his way to Hawaii, where he could skydive year-round.

Williamson was his mother Carla Ajaga's only child, his cousin Natacha Mendenhall said.

"We're all very upset," said Mendenhall, speaking from her home in Fort Worth, Texas. "She cannot really talk right now. What she wants everyone to know is how full of life her son was, how loving he was."

Williamson, who was from Yukon, Oklahoma, worked as an instructor and as a videographer who filmed customers as they dove. He was trying to earn more jumping hours and learn the trade, Mendenhall said.

Williamson's family has not been officially notified of his death. But they provided Honolulu police with Williamson's name and date of birth, and the police confirmed he was on the flight, Mendenhall said.

Police told the Honolulu Star-Advertiser that the victims were nine men and two women. Both women and three of the men were all in their late 20s. Police, who didn't return messages to The Associated Press, didn't have ages on the six others.

Homendy with the NTSB asked anyone with information about the accident, including if they have photos or video, to share that with the agency.

Steven Tickemyer said he saw the plane take flight, get 75 to 100 feet (22 to 30 meters) off the ground and turn away from the mountain range nearby.

He said the plane then started to nosedive and flip over belly forward so that it was upside down. The aircraft then flipped over again and hit the ground nose first. There was an explosion when it hit the ground.

This all transpired in about 20 to 30 seconds, said Tickemyer, who watched from a beach across the street where he was attending a friend's small wedding ceremony.

He and his friends hopped in his truck, called 911 and drove over to help. They screamed to see if anyone would respond, but no one did, he said.

The flight was operated by the Oahu Parachute Center skydiving company. The ratio of employees to customers aboard suggested that tandem jumps may have been planned in which the customers would have jumped while attached to experienced skydivers, Tim Sakahara, a spokesman for the Hawaii Department of Transportation, told reporters.

Witness Wylie Schoonover saw the plane flying over trees while driving from a nearby YMCA camp after picking up a friend. Then she saw smoke billowing from the airfield and drove over.

There was an "insane amount of fire," she said.

"It didn't even look like a plane. A bunch of people were asking 'what is this?' It was completely gone," Schoonover said.

No one answered the phone at Oahu Parachute Center on Sunday, which advertises its services on a web site saying its jumps offer people "a magical experience." Tandem jumps are featured at prices ranging from $170 to $250.

Dillingham Airfield is used mostly for skydiving and glider flights. Hawaii shares the airfield with the Army, which uses it for helicopter night-vision training.