The report Friday indicated that human error could be an important factor in the May 5 crash. 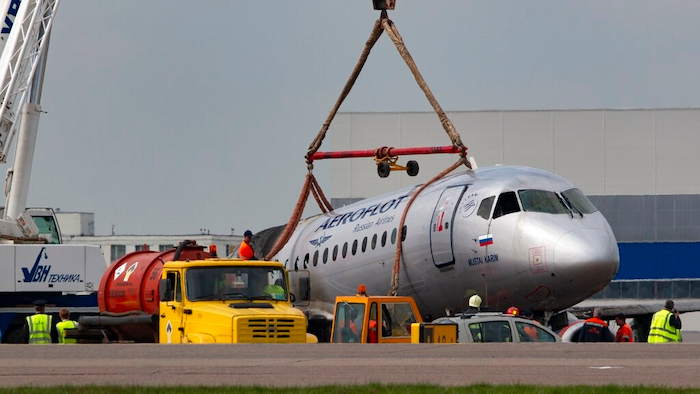 A crane lifts the damaged Sukhoi SSJ100 aircraft of Aeroflot Airlines in Sheremetyevo airport, outside Moscow, Russia, Monday, May 6, 2019. Russian emergency workers have recovered 41 bodies and two flight recorders from the wreckage of the plane that caught fire during an emergency landing in Moscow, officials said Monday as they sought to discover the cause of the disaster.
AP

MOSCOW (AP) — A Russian state news agency says a report from the country's civil aviation authority indicates that the crew of an airliner that caught fire while making an emergency landing, killing 41 people, had not deployed the plane's air brakes.

The report Friday indicated that human error could be an important factor in the May 5 crash of the Aeroflot SSJ100 at Moscow's Shermetyevo airport. Video showed the plane making a hard landing and flames bursting from its underside, quickly enveloping the rear half of the fuselage. In all, 33 people survived.

The RIA-Novosti news agency said it had obtained a report from Rosaviatsiya, the civil aviation authority, which showed the brakes — flaps that hang down from a plane — were not used. It also said the pilot changed the plane's pitch markedly.