41 people were killed after the plane made an emergency landing and then caught fire. 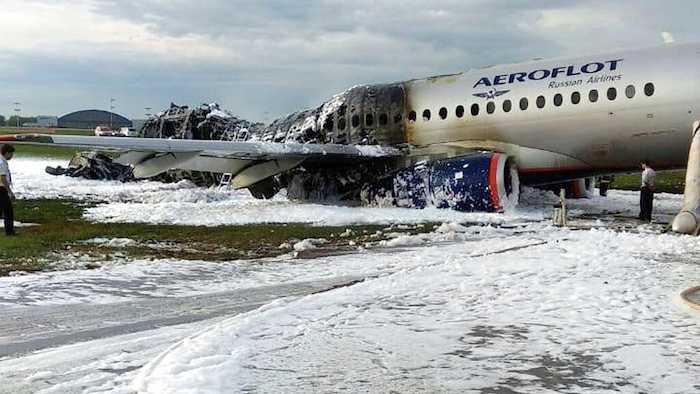 The Sukhoi Superjet 100 aircraft of Airflot Airlines, center, is seen after an emergency landing in Sheremetyevo airport in Moscow, Russia, Sunday, May 5, 2019.
Moscow News Agency photo via AP

FRANKFURT, Germany (AP) — The Aeroflot-operated SSJ100 passenger jet that caught fire during an emergency landing in Moscow is part of Russia's efforts to maintain a presence in civil aviation in a market dominated by companies like Boeing, Airbus and Embraer.

Here's a quick look at the SSJ100 and the Russian company that built it, the Sukhoi Civil Aircraft Company:

The SSJ100, or Superjet 100, is a short- to medium-haul narrow body jet with two engines that can be configured to carry up to 103 people.

At that size, it's intended to substitute for larger planes such as the Boeing 737 or Airbus 321 on shorter, less travelled routes and during slower travel seasons. Regional aircraft are an important part of Russia's transportation system, given the country's enormous distances and many remote towns. The Superjet succeeds older, Soviet-built planes such as the Tu-134 airliner.

The plane is built at the Sukhoi Civil Aircraft Company's plant in Komsomolsk-on-Amur in Russia's distant Far East region. Although the design is Russian, the company says it uses the latest Western technology as well. The engines are made by PowerJet, a joint venture between France's Safran Aircraft Engines and Russia's Saturn.

The plane first flew in 2008 and entered commercial service in 2011. It is certified by the European Union Safety Agency but is mainly used in Russia and has not made much headway against international competitors, not just from Boeing and Airbus but also from Brazil's Embraer.

Aeroflot is the biggest client with 50 of the planes. Mexico's Interjet said Sunday it operated five of the planes "under the highest safety standards."

Interjet earlier operated 22 Superjets but referred in a recent earnings report to the "gradual phase out of the fleet of SSJ100." The company reported lost sales after the planes were grounded due to a defect in the tail section in December 2016 and said it was seeking "contractual recovery of amounts related to maintenance costs" for the planes.

Ireland's CityJet, which supplies planes and crews to other airlines, stopped operating several Superjets in January.

The Sukhoi Civil Aircraft Company bears the name of the legendary Soviet aircraft designer, Pavel Sukhoi, who was responsible for a series of Soviet military aircraft starting before World War II.

Today's firm is part of Russia's United Aircraft Company, which consolidated many of the legendary names of Soviet aviation such as MiG, Sukhoi, Tupolev and Yak. UAC was established by a decree from President Vladimir Putin in 2006 to promote the Russian aircraft industry, which is seen as essential for the security and defense of the country. Much of its production goes to the military, while the SSJ100 is the key project aimed at maintaining a Russian presence in civil aviation.

On May 9, 2012, a demonstration flight hit Mount Salak in Indonesia, killing all 45 on board, after the pilot disregarded six alarms from the terrain warning system on the apparent assumption there was a problem with the terrain database, according to the report from Indonesia's air safety regulator. The plane had unintentionally left a circling pattern after the crew was distracted by a prolonged conversation not related to flying the plane.

And a Superjet skidded off the runway at Iceland's Keflavik airport in 2013 with landing gear up during flight certification tests involving landing on one engine; one crew member suffered minor injuries.